Explore early maps and the differences in Wabanaki and European worldviews

About 500 years ago, Wabanakis first received Basque fishermen, Italian explorer Verrazano in 1524 though he noted they weren’t very friendly, French fur traders, and later, English colonists to their homeland.

For me, understanding and reading 17th and 18th century colonial documents through Wabanaki political and cultural frameworks is part of a process of ôjmowôgan, the Abenaki word for history. The language tells us that “history” is a collective process of telling and re-telling, an ongoing activity in which we are all engaged. 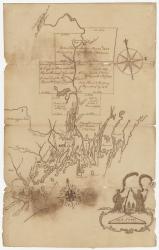 Penobscot author Joseph Nicolar recorded a tribal prophecy noting that elders, “decided, that when the strange people came, to receive them as friends, and if possible make brothers of them.” When English people arrived in Wabanaki territory, including the land now known as Maine, Wabanaki leaders worked to incorporate settlers into their social and ecological networks, to create responsible relationships, and to “make kin” and alliances with their guests.

English guests all too often misinterpreted such hospitality, misunderstanding the obligations that accompanied the privilege of sharing space. The written language of the English as compared with wampum protocols and verbal agreements of the Wabanaki led to confusion and to deliberate dispossession. Even as Wabanaki people strove to incorporate settlers into their Indigenous cultural and economic systems, the settlers sought their signatures and consent of land ownership on finite political documents.” 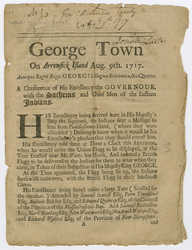 The Arrowsic Treaty (Conference at Georgetown) documents Wabanaki understandings of the ecological capacity and limits of their homeland, and Wabanaki leaders’ insistence on maintaining sovereignty in order to sustain that homeland. Wabanaki leaders, including Wiwurna, met with Governor Samuel Shute of Massachusetts Colony in August 1717 at Menaskek (Georgetown) on Arrowsic Island. The Wabanaki confronted the English about encroaching settlements and trading posts. Wiwurna insisted that English claims to lands on the Kennebec River and east of it were unfounded. He said the Wabanaki territory did not have the resources to adequately host the stream of settlers who were increasingly impacting their homeland.
• Wiwurna: “This Place was formerly Settled and is now Settling at our request: And we now return Thanks that the English are come to Settle here, and will Imbrace them in our Bosoms that come to Settle on our Lands.”
• Shute, interrupting: “They must not call it their Land, for the English have bought it of them and their Ancestors.”
• Wiwurna: “We Pray leave to proceed in our Answer, and talk that matter afterward. We desire there may be no further Settlements made. We shan't be able to hold them all in our Bosoms, and to take care to shelter them, if it be likely to be bad weather, and Mischief be Threatened."

The Wabanakis were willing to consent to existing English settlements if a proper boundary was delineated. Shute responded, "We desire only what is our own, and that we will have." 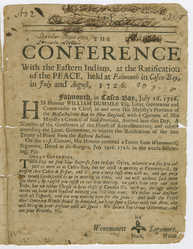 The Conference with the Eastern Indians, at the Ratification of the Peace in Falmouth, 1726

The Conference with the Eastern Indians, at the Ratification of the Peace in Falmouth, 1726

In 1727, the Penobscot speaker diplomat Loron (also known as Lolon Saguarrab) contested the authority of the printed words of this 1726 treaty, The Conference with the Eastern Indians, at the Ratification of the Peace in Falmouth, claiming it did not reflect the verbal exchange in council. Specifically, he objected to the assertion of English sovereignty over Wabanaki people and lands.

"We desire Brothers as we have so good an Understanding together that there be no other Houses built there, unless it be by purchase or Agreement, The Neighbouring Tribes have already told us that we should go on with the Treaty with good Understanding and Courage, and settle every thing, That if a Line should happen to be Run, the English may hereafter be apt to step over it, so that every thing they desire may be Settled Strong."

Loron pointed to the misrepresentation of his words in English print and the validity of his own language, insisting that,
"What I tell you now is the truth. If, then, anyone should produce any writing that makes me speak otherwise, pay no attention to it, for I know not what I am made to say in another language, but I know well what I say in my own. And in testimony that I say things as they are, I have signed the present minute which I wish to be authentic and to remain for ever."

Later, Loron asserted collective sovereignty and the Wabanaki practice of holding lands in common as he refuted the King of England’s authority over Wabanaki territory,
"He again said to me – But do you recognize the King of England as King of all his states? To which I answered – Yes, I recognize him King of all his lands; but I rejoined, do not hence infer that I acknowledge thy King as my King, and King of my lands. Here lies my distinction – my Indian distinction. God hath willed that I have no King, and that I be master of my lands in common."