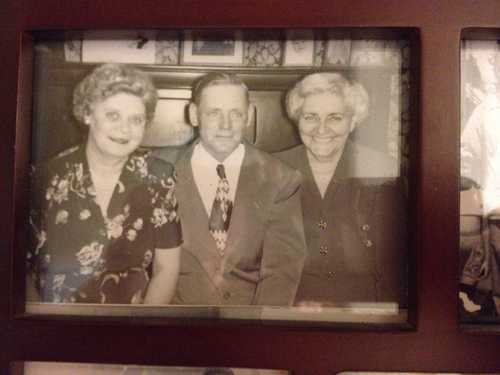 I grew up with Julia Winters Trumble and she said she was in foster care in Lewiston, Maine until she returned to Boston as a domestic, documented in the 1910 census.

When my mother Grace Trumble Zaccagnini passed away in 1952, my sister and I went to live with my grandmother Julia Winter Trumble in Newton, Massachusetts. Julia always said she was born in Boston, but raised by foster parents in Lewiston, Maine. My quest for years is to find where, and with whom she lived from about 1896 to 1909.

My grandmother, Julia Winters, was born September 26, 1893 in Boston, Massachusetts, daughter of James Patrick Winters (Wenters) and Mary Hallett Winters. When Julia was six years old, she was put in the guardianship of Mary Greene with her brother Thomas. I do not believe she stayed with the Greene family long, since I find Thomas in a Parental Home in West Roxbury, Boston in the 1900 US Federal Census.

I wonder where she might have been in Lewiston, Maine. I went to the library and checked for city directories, checked the 1900 census for any Winters in Maine. I did find her brother Willie Winters in Van Buren, Maine living with the Gagnons, Joseph and Marie. He is listed as “orphanedium.” Julia also had a sister Elizabeth Winters who is also missing until the 1910 census when she is with a relative, the O’Briens. But, no record of Julia.

What is interesting is the two sisters, Julia and Elizabeth, married two Trumble brothers Joseph and Arthur. Also, the sisters lost track of their brother Willie Winters until the 1950’s when they found him in Lewiston/ Auburn, Maine. Willie came to Newton, Massachusetts, and lived with Julia for one year. Julia, Willie, and Elizabeth had not seen each other for over 50 years.

Julia died in 1972 and in 2014 my sister Linda Zaccagnini and I went to Lewiston to search for Willie’s family, now named Rossignol. We were at the Hilton Garden Inn having breakfast when we began talking to the waitress. She said she knew there were a lot of Rossingnol’s in Auburn/ Lewiston and she came back with a copy of the phonebook with Rossignol’s. I went home and wrote a note to over 20 people on the list. About a month later I got a telephone call from Theresa Rossignol Clavet. She said, “I did not get a letter, but I am the one you are looking for.” Willie Winters was her grandfather.

We decided to go to Auburn/Lewiston to reacquaint ourselves with our family. Cousin Jayne Hart Daly, Linda Zaccagnini and I went. We met Theresa her, brother Donald Winters Rossignol (actually her uncle) but raised as a brother and her other brother Claude Rossignol, who was visiting from Texas. We went through over 1,000 pictures, and found a picture of the 3 siblings together in the 1950’s: We had the same picture!