Launch of the Doris Hamlin 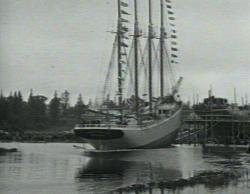 The third to the last ship launched in the Washington County community of Harrington, the Doris Hamlin hit the water in 1919, near the end of more than 100 years of shipbuilding in the region.

The schooner weighed in at 960 tons, also one of the heaviest ships built in Harrington, which once had five shipyards. Harrington shipbuilders turned out more than 130 vessels between 1792 and 1920.

Walter Hayford owned the ship, which was built and launched at the Frye-Flynn Co. shipyard.

In 1931, Captain William Burke Vane, then owner of the Doris Hamlin, took her on a voyage organized by a George Washington University student, L. Ron Hubbard, later founder of the Church of Scientology.

The trip offered undergraduates a chance to serve as crew and to conduct scientific research, historical exploration, treasure-hunting and other activities.

Some students jumped ship and the remainder were broke. The captain had to wire from Martinique for funds to return to the U.S.

Wooden schooners had lost their place in the shipping world, but new owners, in January 1940, sailed from Hampton Roads loaded with a cargo of coal for Tenerife in the Canary Islands. The ship was never seen again and may have been sunk by a German submarine.