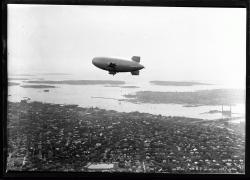 In 1921, Guy Gannett purchased two competing Portland newspapers, merging them under the Portland Press Herald title. He followed in 1925 with the purchase the Portland Evening Express, which allowed him to combine two passions: photography and aviation.

While photography was not a new medium, it was not until after the mid- 1920s when newspapers began to widely feature photographs. Gannett was an innovator in the field, highlighting local interest stories with heavy illustration. Further, technological advancements during World War I improved the ability to photograph from airplanes, and the modern aerial photograph was born.

Gannett harnessed the new technology to capture major events and scenes throughout Maine. Geographic features, natural disasters, and celebrations were all better documented through aerial photography and helped to sell newspapers. Today, the images allow us to glimpse at the past through one of the most significant media influences in Maine.

Images courtesy of Maine Historical Society/MaineToday Media.
This exhibit was made possible in part by the Institute of Museum and Library Services.