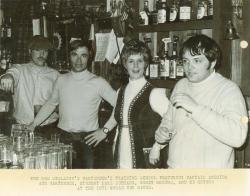 A story by David Rollins from 1960

Carrabassett Village development began in 1959. Bob Marden, who was President of the Maine Senate at the time, suggested to the Dead River Company that it would be good public relations to lease land to vacationers in Carrabassett Valley to build cottages on.

From that came a village of A-frames sold and built by Wes Sanborn and Dave Rollins. In the beginning with urging from early resident, Bud Leavitt, a legendary sports writer from Bangor came the Cousins and Grant families. First resident, Bob Marden, convinced the Dubords from Waterville, the Rideouts and Naimans from Augusta to settle in the village. With good luck came Sugarloaf skiing legends Paul and Ann Bean and Doc and Joan Blanchard. From these pioneers the village grew exponentially. The villagers wanted a place to imbibe, dine, play and be entertained. The idea for the Red Stallion was born.

Ted Williams, Bud Leavitt and Wes Sanborn held a fly fishing camp at the Stallion in the spring of 1962. The Stallion was a wild and woolly place. But usually under control for founding staff members Florence Hall and Laura Dunham of Kingfield who helped design the old barn conversion commanded great respect from the regulars, a combination of local Jud Strunk fans, Sugarloaf staff and skiers.

The Stallion was remodeled from barn to bar by Wes Sanborn with help from the Kingfield Niemi family of fine craftsmen. Wes and his adopted family Dave and Nancy Rollins, sons Michael, Peter and Mark were the original owner/ developers of Carrabassett Village and the Red Stallion Inn.