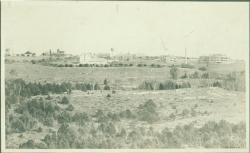 On June 28, 1959, a Portland Sunday Telegram headline noted, "Hebron Sanatorium to Close." A small story explained how a last minute shortfall in the state budget had precipitated, with barely two weeks notice, the hasty removal of patients from the Western Maine Sanatorium in Hebron, a small town located in Oxford County.

Only 30 patients were on hand; 18 were transferred to the Central Maine Sanatorium in Fairfield and the rest discharged. All employees were laid off, and the facility, which opened as a privately operated tuberculosis treatment center in 1904, was summarily closed.

The decision to close Hebron was hardly a surprise, for in the first half of the 20th century, TB had in the West, at least, evolved from a life-changing diagnosis that carried with it a very high possibility of death, to a disease that could not only be controlled, but over the course of about six months of drug therapy, completely cured. The change was due to the development of streptomycin and other antibiotic drugs.

By 1969, the same year as the first walk on the moon, the last Maine sanatorium closed.

The story of the Western Maine Sanatorium at Hebron provides a window into an institution's development and a chronicle of suffering, showing issues of affordability, family impact, community charity and the almost impossible economics of running a health care institution.

By the time that the Tubercule bacillus was identified by Robert Koch in 1882, Tuberculosis had already been understood as a disease that was correlated to poverty, squalid urban conditions and, in general, "social misery."

The sanatorium concept, had emerged in Europe at the second half of the 19th century, and by 1900 it had become the state of the art for TB treatment. Sanatoriums began to appear in the United States early in the 20th century; most were organized by charitable groups like the Maine State Sanatorium Association, which was formed in 1901, one of the first such associations in the country. The association opened the Maine State Sanatorium in Hebron in 1904 with Dr. Estes Nichols as medical director.

TB sanatoriums had two goals. First was containment, moving tubercular people, and especially their infectious sputum, out of everyday life -- not necessarily in quarantine -- but segregated. 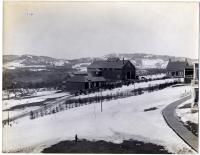 Second was mitigation, or even cure, of the disease. Patients sought to push the infectious aspects of their disease into remission -- or to use the term of the day, be "sputum negative." The facility at Hebron was designed and built for patients who could reach this second goal. Those whose diseases were too far progressed had to find other options.

While there are accounts of TB sanatoriums for wealthy people during this period, the bulk of the clientele were poor or middle class and faced the daunting challenges of lengthy hospitalization and mounting bills, as well as a concurrent loss of income.

As a consequence, prior to its being purchased and taken over by the state in 1915, the correspondence of the Maine State Sanatorium consisted largely of letters to Dr. Estes Nichols, seeking to cut deals, pay off debts and otherwise make financial arrangements. Letters from groups of local citizens who banded together to pay a neighbor's bill were common, as were payment arrangements by employers for the care of an employee's family member.

Such piecemeal, individualized financing arrangements ultimately had an effect on the institution's ability to meet its costs. Superintendent Nichols predicted that the state would need to step in and take over the institution, though he thought it would not be best for patient care. The state already subsidized the care of indigent patients and a number of legislators believed the institution was charging too much or mismanaging funds.

Wealthier people with TB in Maine probably went to private sanatoriums, in Maine or elsewhere in the country. Some of these facilities were much like resorts. Especially popular were sanatoriums in the southwest, where the warm, dry air was believed to be better for the damaged lungs of TB patients.

The era of state-operated tuberculosis facilities in Maine lasted from 1915 until 1969. From the time the state took over in 1915, the Central Maine Sanatorium was designated as the facility where surgeries were performed and where patients with more advances cases of TB were sent. Presque Isle took patients of all types and performed surgery because of the difficulty of transporting patients from northern to central Maine. Hebron and Presque Isle both closed in 1959.

While new drug treatments contributed to the closing of the sanatoriums, so did an emerging philosophy that state-operated institutions were not the ideal locations for medical treatment or care and treatment of the people with mental illnesses or mental retardation. Philosophies of care had changed.

Dr. Estes Nichols had a vision for a TB treatment center that focused on rest, fresh air, and good food. The design of the buildings and of the campus was crucial to that vision.

Prospective patients sought information and reduced rates, former patients reported on their progress and sought advice, and doctors and others in the community sought to intervene on behalf of patients. Dr. Estes received many hundreds of letters.

An excerpt from a home movie shot in 1934 shows the grounds and some of the activities at the Western Maine Sanatorium.

Merle Wadleigh, who spent part of 1928 and 1929 at Hebron, recorded some of his experiences in photographs, which he saved in an album. The photos provide non-institutional insight into some of one patient's views of his time at the "san."

Whether it was operated privately as the Maine State Sanatorium or publicly as the Western Maine Sanatorium, the TB treatment facility in Hebron was expensive and challenged the available resources.