Lack of military support from Massachusetts for the District of Maine during the War of 1812, especially during the British occupation of Eastport, helped to support the cause of separation. Prior to the war, Mainers had been divided on whether to pursue independence from Massachusetts. The negative experiences with the War of 1812 accelerated the political process that led to Maine becoming a separate state in 1820.

In March 1814, the New Brunswick Legislature disputed the boundary between British North American and the United States, which was established in 1784 after the American Revolution. The British called the territory containing Eastport, "Moose Island"; they believed Moose Island was, and always had been theirs. The British thought the Americans—who had moved steadily up the coast and establishing towns in Castine, Machias, and eventually Eastport— had encroached on their territory.

Eastport was special because it was a sea-going trading center between American ports to the south and British Empire ports to the north in the Maritimes, as well as to the British West Indies ports of the Caribbean. Flour and salted meat came "down east" from the American states and were exchanged at Eastport for British manufactures, West Indies sugar and molasses, and gypsum from New Brunswick and Nova Scotia. Because of the Americans' Independence, they were legally cut out of the trade of the British Empire. Trade in Eastport had elements of smuggling, and the British in New Brunswick and Nova Scotia, as well as the West Indies, turned a blind eye to the lack of licenses.

It wasn't just about Eastport

For centuries, Tribal Nations, British, French, and Americans, disputed the boundaries and control of the islands in Passamaquoddy Bay. With Napoleon's abdication in 1814, the British were in a position to enforce their ownership of American territory—including Moose Island—but also to extend their reach across Northern Maine, down the Penobscot River, across New York, Pennsylvania, Ohio, and all the states further west.

The capture of Eastport 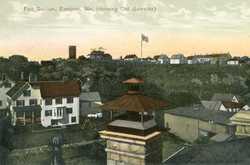 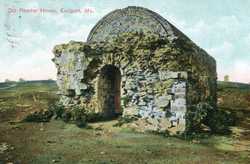 The citizens of Eastport were not aware of the coming invasion. Captain Jacob Varnum recorded in his journal: "When we were sitting in our piazza on the morning, enjoying a cool breeze from the ocean, suddenly the reach or strait inside of Grand Manan became whitened by the canvas of a large fleet of vessels making directly for our harbor. It was a beautiful sight but rather ominous".

There was a level of apprehension during the morning of July 11, 1814 after the townspeople learned the regiment on board the four war ships including the HMS Ramillies and HMS Borer was the 102nd—the same regiment responsible for the sacking of Hampton, Virginia in 1812. British commanders gave strict orders not to harm the citizens of Eastport and to respect private property.

The American troops at Fort Sullivan on top of Clark's Hill—a garrison of seven officers, 80 soldiers, four guns and 250 militia with inconsistent training—were terrifically outnumbered. The British 102nd Regiment of Foot had 26 officers, 84 non-commissioned officers, 571 privates, and 23 musicians. Also with them were an artillery company and engineers from Halifax. The British Navy warships carried 116 cannons, 900 sailors, and 152 Royal Marines.

The American surrender of Eastport 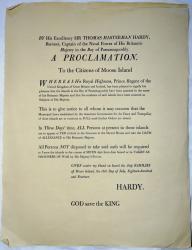 Hardy's proclamation to the citizens of Moose Island, Eastport, 2014

British Lt. Oates took a boat ashore and presented a demand that Fort Sullivan surrender within five minutes. The American commander, Major Perley Putnam, asked for more time, which he was denied.

Before embarking on his ship, Lt. Oates noticed the soldiers at Fort Sullivan were lowering the American flag. Oates had been told to wear his hat if the Fort surrendered, and not to if it was planning to fight. Fortunately, Oates boarded his ship wearing his hat, and the capture of Eastport occurred without bloodshed.

The legendary Sir Thomas Masterman Hardy was the mastermind of the capture of Eastport and Captain of the HMS Ramillies. Hardy and Colonel Thomas Pilkington commanded the British Troops in Eastport. They issued a proclamation making it very clear that Great Britain considered Eastport and the nearby islands as British Territory.

Lt. Oates was the nephew of Sir John Coape Sherbrooke, for whom Fort Sullivan was renamed during the occupation. Lt. Oates was given the honor of taking the American Flag from Fort Sullivan to Lord Bathurst at 10 Downing Street, London, presumably to give Oates a leg up in his career, assisted by his uncle.

Townspeople were required to take an oath of allegiance to the crown or leave the island. The oath was carefully phrased, noting that allegiance was owed as long as British control extended to Moose Island. Two thirds of the approximately 1500 inhabitants took the oath. The British naval force left on July 24, 1814, but the British army remained until 1818. 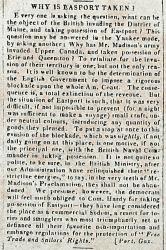 Read newspaper articles from 1814 about the capture of Eastport

During the occupation, men on Moose Island were required to sign the proclamation below. Anyone unwilling to sign moved to Lubec, which remained under American control.

We the undersigned, Do sincerely promise and swear that we will be faithful and bear true allegiance to his Majesty King George, III and will defend to the utmost of our power against all traitorous conspiracies and attempts what so ever which shall be made against his person, Crown or Dignity; and we will do our utmost endeavor to disclose and make known to his Majesty, His Heirs and successors, all treasonous and traitorous conspiracies and attempts, which we shall know to be against him or them. So help me God.

Since the British considered the territory their own, and not occupied, the inhabitants were treated civilly, and there was little violence during those years.

The British were unsure they could maintain their occupation of Eastport, and kept all of the customs duties in escrow. The economy of Eastport suffered under British rule, since the advantages of smuggling ceased. Instead, Castine, Machias, and Lubec became the new international ports in Eastern Maine.

Eastport returned to American control in 1818 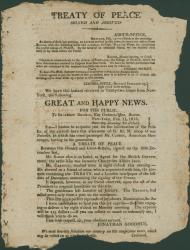 President Monroe appointed Brigadier General James Millar to lead the American delegation for the formal restoration of Moose Island. Lt. Colonel Henry Sargent, sent by the Governor of Massachusetts, accompanied him. The delegation arrived in Eastport in June, 1818, the first American soldiers to set foot in Eastport for four years. They made camp in town, and remained for a week until the British relinquished Fort Sullivan. On July 21, 1818, the American Mercury reported Col. Sargent's remarks, including:

Pursuant to my instructions, I have the honor to inform you, that his Excellency John Brooks, Governor and Commander in Chief of the Commonwealth of Massachusetts has directed me to make known to you the pleasure which the Supreme Authority of the State receives from your restoration to the full enjoyment of all the rights and benefits of our Constitution and laws; and to congratulate you, that the questions of title to the same, which have heretofore existed, are now finally decided by the governments of the United States and of Great Britain; and that the jurisdiction of this Commonwealth over the same is now complete and undisputed.

The Treaty of Ghent ended the War of 1812 in December 1814. Despite the peace between Great Britain and America, Moose Island remained under British control since the issue of ownership of the islands in Passamaquoddy Bay was held up in commissions writing the peace treaty. By February 1818, the American and British governments signed Article 4 of the Treaty of Ghent, and Eastport was formally returned to the District of Maine on June 30, 1818.

A few days prior to the end of the occupation, 42 Eastport residents wrote a letter of gratitude and respect to British Captain Richard Gibbon, of the 98th Regiment of Foot. He was commended for honesty and fairness in administering Martial Law. Major Gallager and Dr. Betts also received high praise from residents. 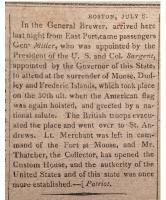 In the early morning hours of June 30, 1818 a large number of Eastport residents gathered at the parade grounds of Fort Sullivan. They eagerly awaited for the historic moment when General Miller would receive Moose Island and it would be delivered from the British.

The ceremonies began when British and American soldiers formed ranks around the Fort's flagpole. Orders were read, returning Fort Sullivan and Moose Island to the control of the United States. The color guard made up of American soldiers fired a national salute of 20 guns and the band played Yankee Doodle while the British flag was lowered. As the American flag was raised and reached the top of the pole a slight breeze caught it. The large throng of residents and soldiers shouted, because for the first time in four years the Stars and Stripes once again flew proudly over Fort Sullivan.

After the ceremonies the British and American soldiers exchanged salutes. The British formed a double column and evacuated Fort Sullivan. They were followed by a large friendly crowd of townspeople. 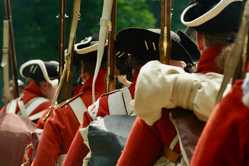 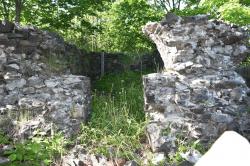 200th anniversary of the capture of Moose Island, Eastport, 2014