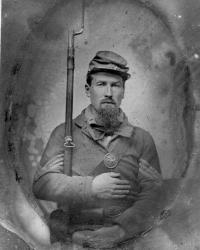 Lt. Alexander Crawford Jr. Lt. Crawford was the commanding officer of Co. G, 31st Maine Volunteers. This was his second tour of duty, having previously served a nine month enlistment with the 21st Maine Volunteers. This photo was probably made in the summer of 1864, near the time of the seige of Petersburg, VA. Crawford made the rank of Sargent in May of that year and was seriously wounded in July. Therefore, this photo must have been taken between those two dates. After partially recovering from his wound, he rejoined his regiment in February of 1865. Soon after this, he was commissioned a Lieutenant and assumed command of Co. G, 31st ME Volunteer Infantry, a post that he held until his unit was mustered out in August of 1865.

Alexander Crawford a soldier from Skowhegan, was born in 1839 on a farm on the Dudley Corner Road in Skowhegan. Growing up in Skowhegan, Crawford's father was a farmer and his mother a house wife. Crawford lived with his 4 sisters in a farmhouse.

Crawford's career in the military began during the Civil War after he enlisted in 1863. Alexander served in the Maine 21st then 18 months later, he joined the Maine 31st Battle Division.

He started out in the military just like any other newly enlisted solider, a Private. Crawford soon made his way up the ranks in his company becoming a Second Lieutenant and then a Lieutenant, and soon after, a commander of his company. During one of his many battles, Crawford was sent to a hospital where he was treated.

After many months in the hospital, Crawford reenlisted in the army and was sent back to the front lines. By then the war was practically over and no further major combat took place.

During the many parades in Washington D.C. to celebrate the end of the war, Crawford can be seen. There is a parade in one of the accompanying photos.

After the war, Crawford returned to Skowhegan and bought back the family farm because the family had financial problems during the war. The farm was near the current day Philbrick farm.

Alexander Crawford dated a girl from New Sharon, Maine and during the Civil War, they corresponded. Many of his girlfriend Tin's letters have survived and are in a collection at the Skowhegan History House. In our class with Ms. Richter and the community volunteers, Lee Granville and Lynn Perry, we have examined these letters and learned what it was like in the Skowhegan area back in the mid-1800's. Anyone can go and see the collection of personal items of Alexander Crawford if they visit the History House on Elm St. Skowhegan. Here is a quote from one of his letters:

"Tin, You will see by the date of this that I have got back to Old Maine the Regt arrived in Bangor last Wednesday morning. I remained in Bangor untill last saturday and then went to Augusta and came up home that night. I shall have to go back to Bangor tomorrow morning for I ran way and you know children are apt to get punished when they stay away too long without leave. I expect it will take all of this week to get discharge paid off, I shall be glad when it is done. You don't know how lonesome it is here. I have not been at home but one day yet but it seems as if that day was a week long if I can manage to pass to day I think I can get along very well the rest of the week. After I get back from Bangor I shall make it in my way to call on to New Sharon if nothing happens so I not try to write much this time.

If you can call this writing for it looks like any thing but writing to me, so excuse all mistakes hoping to see you soon I will close."

This is a Civil War whiskey flask. Civil War soldiers would buy whiskey from traveling store vendors that would follow the troops. Sometimes they used whiskey to calm the patients while they were in surgery.

This drawstring bag was used by Crawford to carry his small personal belongings. He carried buttons, lead bullet balls, ruler, and coins.

Eucre cards were used in the Civil War by Skowhegan soldier Alexander Crawford, Jr. Soldiers would play cards at the end of the day to keep their minds off of the gruesome battlefield.