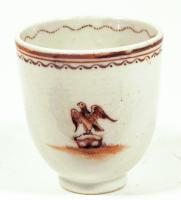 The American confectionary industry was largely developed in New England, and Maine was one of the highest producers. It began with the production of chocolate, in the 17th century and has continued through the 21st century.

Chocolate was one of the fist confections enjoyed by people around the world. Mesoamericans consumed chocolate as a bitter drink as early as 1900 B.C. They mixed ground cacao plant with water, spices, chili peppers, honey, and/or vanilla. It was not the typical hot chocolate we think of today, which is often sweet and creamy.

Cacao came to Mexico through Aztec and Mayan trade in the 15th and 16th centuries. Chocolate became a favorite beverage of Aztec Emperor Montezuma, who consumed gallons of this drink every day. Hernán Cortés sampled the chocolate drink when he came to Mexico, but he added sugar and cinnamon to sweeten it. Cortés introduced cacao to Spain where a sweetened version of the chocolate drink became popular among elite society.

Upon the marriage of Spanish Princess Anne of Austria and French King Louis XIII in 1615, chocolate became known to the rest of Europe. As the availability of cacao increased in Europe, the chocolate drink became popular among common folk as well as the elite.

Colonists brought the hybridized chocolate back to the Americas when they settled in the New World. The production of chocolate began in Boston in 1682. By the mid-18th century Benjamin Franklin was selling chocolate out of his shop in Philadelphia, and George Washington was serving the chocolate drink to his guests at Mount Vernon for breakfast. In 1865, the chocolate drink, chocolate ice cream, and a chocolate pyramid were featured at Abraham Lincoln’s second inauguration ball.

The introduction of chocolate candies 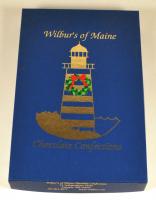 In 1828, Dutch chemist, Coenraad Johannes van Houten invented the cocoa press. It was used to squeeze cacao butter from cacao beans and to combine it with other ingredients like spices, sugar, etc. The freshly made chocolate was then poured into molds where is hardened into solid chunks. It was sold like this in local stores. It was still common to drink chocolate, so solid chocolate would be shaved and mixed with hot water to liquefy it. Once chocolate became available in a solid form, bakers and confectioners started using it to enhance their recipes.

Bakeries used solid chocolate as an ingredient regularly by the early 20th century. One of these bakeries was T.A. Huston & Co. in Portland, located on Forest Avenue which as of 2018 is the Albert Brenner Glickman Family Library at University of Southern Maine.

Founder of T.A. Huston & Co., Thomas Huston, started his bakery in 1869 in Auburn but moved it to Portland in 1919. Some of their products included chocolate candies, cookies, and their most popular item: Sebago Lunch Biscuits, which were made with Sebago Lake water.

The first chocolate bar that was meant to be eaten as candy was sold by British confectionary J.S. Fry & Sons in 1847. Other confectionaries in Europe and the United States began selling chocolate candies as well.

Haven’s Candies, which was established by Herbert Haven in 1915, is one of these confectionaries which is still in operation as of 2018. Haven’s handcrafts candies using traditional methods. Some of their tasty treats include chocolates shaped like shells, lobsters, or moose, Needhams, and salt water taffy.

Maine confectioners specialize in Needhams, or Maine potato candy. These unique treats are only sold in Maine and are made of chocolate, coconut, sugar, and potato.

It is unclear how such a confection came about, but the most popular story revolves around George C. Needham. Needham was a popular Protestant minister of Irish descent who immigrated to America in the late 19th century. He was editor of a Christian magazine and preached throughout the Northeast United States.

Candymaker Mr. Seavey made a new candy which he cut into squares. Mr. Seavey suggested that they call these new square-shaped treats, Needhams, after the well-known preacher. These potato candies have been called Needhams ever since, and are usually served during holidays and special occasions. 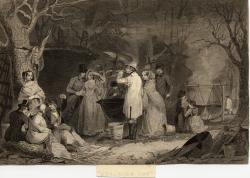 Maple syrup and maple sugar are used as sweeteners and eaten as candy. Early settlers learned to harvest and process maple sap from Wabanaki people, who used syrup as a food and medicine.

Dairy farmers started harvesting maple syrup in the 17th century as a way to supplement their incomes.

Maple products became the most important sweetener for northern colonists in the 18th century, because it was more affordable than white sugar or molasses and it was readily available.

By the 19th century, maple syrup and maple sugar were so widely used as sweetener that abolitionists argued that it could replace slave-produced white sugar cane from the West Indies and Africa.

Northern colonists held "sugaring off" parties in the spring to celebrate and sample the freshly produced maple syrup and maple sugar. These parties were usually held in the woods near the sugar houses where the sap was boiled down into syrup or crystalized sugar.

Sometimes maple sugar was pressed into molds and eaten as candy, or used as a sweetening ingredient.

Spruce gum is another treat native to New England--in fact, it was processed in Portland.

John B. Curtis was the first to commercialize chewing gum in 1850. His company, Curtis & Son Company, had two locations in Portland: 9 Deer Street and 289 Fore Street (as of 2017, home to Hub Furniture).

Workdays began at 7 a.m. and ended at 5:45 p.m. The men who worked in the factory made twice as much. The factory offered employees an extra $1 per week in the summer as incentive to stay there instead of going to more desirable seaside resorts for work. 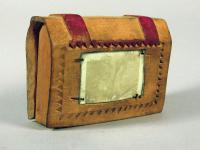 Between 1848 and 1910, Maine was the largest producer of chewing gum in the Northeast. One of the primary ingredients was spruce gum, which was readily available in Maine woods.

Gummers were often lumbermen or trappers looking to supplement their incomes. It was a difficult job because it required climbing trees and scrapping the hardened sap from the bark. They often used chisels or other tools to scrape the gum and stored it in canvas bags. Gummers made a decent wage, which ranged from ten cents to a dollar a pound depending on the quality and time of year.

Spruce gum boxes or gum books were often kept as keepsakes. Since many gummers were lumbermen or trappers, they spent long months away from their families and sometimes returned home with gifts. Many of the boxes were hand carved or decorated, and were filled with lumps of spruce gum on the inside. The boxes were usually made from wooden blocks (2x3x5 inches) and had sliding covers or drawers that held the gum. 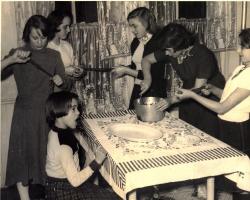 Another sticky confection that was popular in coastal towns of New England was salt water taffy. It was first produced in Atlantic City, New Jersey in the late 19th century.

There are several stories about how salt water taffy got its name. Many believe the name originated with candy shop owner, David Bradley. In 1883, Bradley’s shop was flooded during a major storm, and all of his taffy product was covered in salty sea water. Upon request, he shared a piece of “salt water taffy” with a girl who came to his store to purchase taffy. She tasted it and bought it. Bradley’s mother overheard him refer to the product as “salt water taffy,” and loved the name so much that they kept it.

Salt water taffy is not actually made with salt water. Ingredients include sugar, cornstarch, corn syrup, glycerin, water, butter, salt, flavor, and food coloring. The salt and water are added separately. Taffy was originally cooked in copper kettles, cooled on marble slabs, and then pulled from a large hook. Pulling aerates the taffy, which keeps it soft. Pulling taffy became an enjoyable evening activity among friends. Once pulled, it was rolled out, cut into bite-size pieces, and wrapped in wax paper. Contemporary taffy is cooked in large pots and is pulled and wrapped by machines. 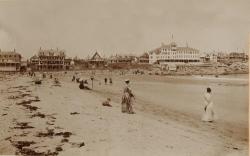 The demand for salt water taffy quickly made its way into the New England states, including Maine. The Goldenrod in York Beach was a popular place to purchase taffy in the early 20th century and is still in operation as of 2018. Edward and Mattie Talpey established The Goldenrod in 1896, locating it near the railway stop in York Beach. Mr. Talpey stood in front of the windows and pulled taffy, so pedestrians could watch. Pulling machines are set up beside the windows in 2018, and pedestrians often watch as they sample taffy.