A story by anonymous from 1940s 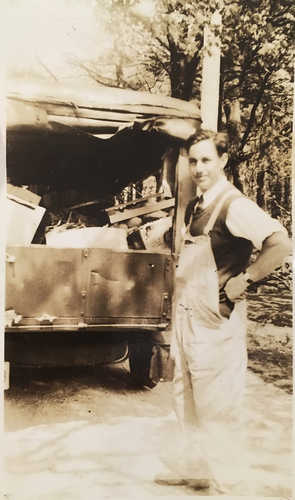 Peter J. Spanos, circa 1945 with his fruit peddling truck.

Peter J. Spanos, circa 1945 with his fruit peddling truck.

Peter escaped from Smyrna, Asia Minor via an American cargo ship, the Winnona, in 1922. Before the genocide began, he had obtained a visa through the American consulate by showing Mr Parks, the American Consul General, affidavits from his uncle George Panages in Portland offering to send boat fare and pay for his and his families expenses until Peter could find work himself. Peter already had a rapport with Mr Parks, as he was a patron of the private club "Alliance Francais" where Peter was a waiter, so he was happy to help with the necessary paperwork. Fortunately, despite the chaos during of destruction of Smyrna, Peter held on to his papers which eventually allowed him to board the Canadian Ship "Antonia" in Cherbourg, France which arrived in Canada on July 1st, 1923.

By July 3rd he passed through Canadian immigration and was put on a train to Grand Trunk Station in Portland where he was picked up by his uncle George Panages. He spent his first night in Portland at the Windsor Hotel which his uncle owned at the time, and his first full day in Maine was at Old Orchard Beach, celebrating the 4th of July surrounded by a new extended family, most of whom he had never met.

By the 1940 census, he is listed as a "Fruit Peddler", and his uncle George is listed as "Fruit Dealer". He sold his produce from a large Dodge truck with a round logo that he painted which said "Peter J Spanos" on the top and "Fruit and Produce" on the bottom. The sides of the truck were made of canvas, and he would set up displays of fruit and veg in boxes "like a staircase" and then roll up the canvas sides so his customers could see what he had available. Some customers also had standing orders with him for specific items.

Per the City Directories, George Panages owned a business at 88 Oak St called "Center Fruit Store". "Peter J. Spanos" himself is not listed in the City Directories as a "Fruit Dealer" until 1951, the year after Center Fruit Store stops being listed in the directory and George is listed as "retired". Family members remember Peter Spanos was on his own selling fruit AND vegetables door to door in the warmer months, and switched to sign painting during the winter months. His sign painting workshop was in the basement of the 3 family apartment building which he owned.

Peter Spanos sold fruit and vegetables door to door, primarily in more affluent towns like Cape Elizabeth, Falmouth, and Yarmouth. He was known as "Pete the Greek" by the vendors at the Market, with whom he developed many connections and associations. After the Commercial St market eventually shut down due to the arrival of supermarkets, Spanos had to drive to Boston once a week to purchase his products, arriving there at 1am when they opened to have the best selection. His customer base was developed by word of mouth, and many of them were wealthy. His most memorable customers were Bette Davis and her then husband, actor Gary Merrill, who had "an estate" in Cape Elizabeth in the 1950s when she was filming "The Virgin Queen".

The advent and popularity of supermarkets slowed Peter Sapnos' door to door business, but by then he was older and ready to "retire" to only sign painting.