Henry (Harry) Ware Lyon Jr., son of Rear Admiral Henry W. Lyon, who had a notable naval career, was an unlikely candidate for fame, especially the fame he received as navigator on the first trans-Pacific airplane flight.

Harry Lyon (1885-1963), attended a military school in Pennsylvania and, through his father's influence, was appointed to the U.S. Naval Academy in 1905. He failed out of the academy, served aboard several merchant ships and finally became captain of a merchant ship. But Lyon was known more for his misdeeds than his accomplishments.

That changed in 1928 when Lyon, who had been in an airplane only a few times, agreed to be the navigator for famed Australian pilot Charles Kingsford Smith and his attempt to fly across the Pacific.

Lyon, fellow American James Warner, who served as radioman; pilot Smith, and Australian co-pilot Charles Ulm set out from Oakland, California, on May 31 and, 83 hours and 50 minutes later, after stops in Hawaii and Fiji, landed in Brisbane, Australia on June 9, 1928, to 15,000 enthusiastic supporters.

Lyon, of Paris Hill, had taken a circuitous route to gain fame as an airplane navigator.

Harry, away at school, did not spend much of his youth in Maine. He attended Hebron Academy while waiting for an appointment to the Naval Academy, where he was briefly. He then attended Dartmouth College for a year, before signing on as a crew member aboard the Dirigo, the first steel ship, built in Bath by Arthur Sewell & Co. Harry explained his job: "My official capacity being ordinary seaman but to my family 'gentleman rope hauler.'" Captain George Goodwin of Bath and his crew put to sea around the Horn to Honolulu, where they arrived in April 1906 after a fire caused a delay in Uruguay.

His parents, Henry and Liela Lyon purchased a house in Paris Hill in 1899 and moved there full time in 1907 on his retirement from the Navy. They decorated the house inside and out with items salvaged from ships destroyed in a Hurricane near the Samoan Islands, including a lion's head off a ship that they placed over the front door. The house has been known to Paris Hill residents as "Lyonsden" ever since.

Admiral Lyon wanted his son to work with a merchant in Hawaii, but Harry instead returned to Philadelphia on the Dirigo.

For the next 6 years Harry sailed on steamers as Chief Mate and then Master. According to his memoir he experienced a mutiny aboard the Pacific Mail Company Aztec, and was fired from the San Francisco and Philippine Steamship Co. for having a most undignified fight with a laundryman in front of several hundred passengers. He eventually went to Honolulu to become an assistant inspector of construction at Pearl Harbor Navy Yard. In 1913, he received his first command on the S.S. Likliki, which transported tourists, sugar, and people suspected of having leprosy.

While he was in Hawaii, Lyon took his first airplane flight. He was commander of a steamer at the time. Lyon responded to a call for a volunteer to go up with pilot Tom Gunn. Lyon wrote: "... someone dropped an inner tube around my neck and shoulders. Someone else handed me a big jug of whiskey, this being, I suppose, so I shouldn't back down. Then I was rowed out to the bus and took my seat between the pilot's feet.

"It was a hectic time getting the old thing out of the water but finally she seemed to rise and as I looked ahead, I could see my own ship right in our path, apparently coming roadside towards us at a terrific speed. I was convinced that we would crack up on her smokestack so I closed my eyes . . . When I opened them and looked down, there was the ship many feet below us . . . We circled over the land and it was very bumpy which to a person making his first flight is not comforting. Personally, I was rather frightened but could not show it as I was hailed as a hero when I got back to the wharf. I didn't fly again for three years."

After the war Lyon was given several commands under the United States Shipping Board. In 1924, he and a friend bought the concessions on combination passenger and freight steamers in the Mexican States Line Company. But Lyon got caught in a revolution in Manzanelli, where the ship was turned over to the rebels and some rebel generals drank the liquor he had aboard for the concession. He never got paid. He was incarcerated for a while in a fort in Acapulco as a result of the revolution.

After several other adventures and misadventures, he returned to Maine in the fall of 1927, the first time he had been home in ten years.

In the winter of 1928, when Harry Lyon was in California as a witness in a rum running case, his friend Captain J.C. MacMillan, the assistant hydrographer at the Marine Department, asked him if he wanted a job as navigator of an airplane.

Lyon wrote, "I thought he was crazy, especially when he told me that the plane was to make a flight from Oakland to Australia. As a matter of fact, I asked him to try one of my brand of cigarettes instead of his own. After he assured me that he was really in earnest, did I begin to consider the proposition." 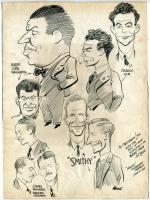 Lyon then met Charles Kingsford-Smith and Charles Ulm, the Australian pilot and co-pilot who were outfitting the Southern Cross and planning the historic flight. Lyon agreed to take the job.

The Australians had bought a Fokker trimotor and outfitted it to attempt a non-refueled endurance record. They failed and, with financial support gone, nearly returned to Australia. An American donor came forward and they then outfitted the aircraft with a massive wood wing, a compartment with emergency provisions and a distilling plant for water. A fuel dumping valve could clear the tanks in under a minute if necessary, then be sealed off leaving the empty tanks to add to the aircraft's buoyancy. The crew even had saws available to cut away the engines, turning the entire airframe into a life raft.

The blue and silver Southern Cross weighed 14,400 lbs and had a wing spread of 72 ft. The three engines produced a total of 675 horsepower and had a cruising speed of 100 mph. 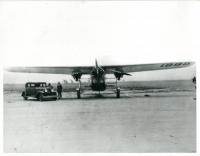 Lyon recommended James Warner, 36, who had spent 16 years in the Navy, as radioman. Neither American had flown long distance and Lyon had never navigated an airplane, nor "seen a bubble sextant before, let alone use one." He practiced taking sights at night on top of Mt. Tamalpais, then experimented on a long stretch of road outside a beach in San Francisco. A helper stationed himself a mile or two away from Lyon and sighted a star, which he would keep on the horizon as best he could.

Lyon wrote, "I would be in a high powered open car with someone driving and we would go tearing down the road. I would stand up and observe the same star as I passed my helper. Then we would compare. The effect of the fast moving car, the bumps, etc., had the same effect as taking an observation from a plane. We got in quite a bit of practice at this but after the third arrest it became too expensive."

He also practiced in the air with the help of Kingsford Smith. A week before the departure, the crew of four flew from San Francisco to Long Beach to test the plane and navigation system. Lyon wrote in his memoir, "The fact that we made all these courses so perfectly gave me the greatest confidence in the compasses and my ability to use them."

The Southern Cross left Oakland, California, just before 9 a.m. on Thursday, May 31, 1928 for the first leg of the trip to Hawaii. Lyon wrote, "When the Southern Cross swung clear of the Farrallon Islands, twenty-three miles off the Golden Gate of California, and the accompanying planes turned back, the feeling to we four men was one of utter loneliness. We felt, there at an altitude of three thousand feet and over two thousand miles of open water ahead of us, like a pretty small speck in the universe."

At 300 miles into the flight, they lost the radio beacon, so for the next 2,100 miles, navigator Lyon was flying by dead reckoning. When the crew spotted Mt. Mauna Kea, Lyon who was familiar with the area from his years there in the merchant marine, had no trouble finding Wheeler Field. The airplane landed within 10 minutes of their predicted time; it took them 27 hours and 28 minutes.

The next leg, to Fiji, was 3,138 miles over ocean. Lyon wrote, "There was on board 1,287 gallons of gasoline. The total weight was 15,800 pounds, nearly eight tons. The provisions consisted of forty-eight sandwiches, four quarts of coffee and four quarts of water." Getting off the ground was slow and laborious. Lyon wrote, "It was nearly four hours before we attained an altitude of three thousand feet, our usual cruising height." 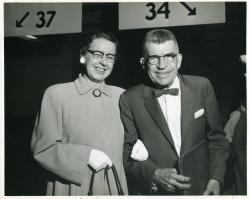 They encountered squalls, headwinds and severe storms. Finally, they brought the Southern Cross in to land on a cricket field after 34 hours 33 minutes of flight with 30 gallons of gas left. The four men tumbled from the airplane and were greeted by crowds (a holiday had been declared on Fiji) many of whom had never seen an airplane before.

Although the Americans had been hired to go only to Fiji, Kingsford- Smith asked them to continue on the last leg, 1,762 miles, to Australia. They encountered the worst flying conditions of the trip, but arrived safely in Brisbane, Australia, on Friday, June 9 at 10:15 a.m.

They were met and escorted to Eagle Farm airport by a flock of biplane aircraft and were greeted by an anxious crowd of 15,000. On Sunday they flew along the coast to Sydney where sirens wailed, ships' whistles blew and people waved their arms from building tops.

Many years later, Lyon told a newspaper reporter that when he looked at the plane after the flight, he was "astounded to see that one section was held together by bamboo and baling wire." Kingsford-Smith said he planned to tell Lyon about that after the trip. Lyon decided to return to the U.S. by ship. He and Warner returned on the Sonoma.

Harry Lyon received a hero's welcome when he returned to Paris Hill in August 1928. The town held a parade and local dignitaries gave speeches from the front steps of the Baptist Church, across the street from the Lyonsden. The American Legion and citizens of Paris and Norway gave him a silver cup and a reception was held at the Country Club. 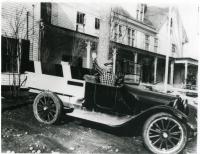 After several other historic flights, in September 1935 Charles Kingsford-Smith donated the Southern Cross to the Commonwealth of Australia where it is on display museum.

In 1958, Quantas Airlines flew Harry and his wife Thelma to Sydney for the 30th anniversary of the flight of the Southern Cross.

Harry Lyon, remembered by many long-time residents as one of the more colorful characters on "the Hill," died May 30, 1963, 35 years after the Southern Cross left Oakland for Australia.