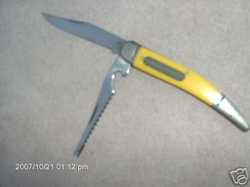 Grandfather went fishing any day that was decent. He was a fair weather fisherman, but still he went fishing so often he caught a lot of fish. None of his catch was wasted.

Grandmother was as good a cook as Grandfather was a fisherman. She expertly prepared and served just about everything he brought home: brook trout, mackerel, cunner, cod, flounder, white perch, crappie, and even boney old pickerel. No matter what the fish, Grandmother had a recipe.

But before Grandmother could work her magic, it was up to Grandfather to clean the fish and that was a process. I helped him many times and remember his preparations and routine. He began with two pails - one full of flounders recently caught in the Scarborough Marsh, the other with fresh water for rinsing. He pulled a rickety sawhorse into the opening of the barn door where there was bright sunlight. He sat on an overturned bucket with an old lifejacket for a cushion. Grandfather owned an LL Bean fisherman’s folding knife. The handle was a sort of a bone yellow and there was a hook sharpening stone embedded in the side. There were two blades; one a long thin filleting blade and the other was serrated for descaling fish. He laid old newspaper over the sawhorse and set a small whetstone nearby.

Just before picking up the first fish Grandfather reached into his pocket and pulled out a small block of Day’s Work chewing tobacco. Grandfather had no teeth so he could not bite off a chew the way his buddies did. Grandfather used his knife to carefully carve slivers from the block of tobacco and transfer these balanced on the blade of the knife into his mouth. He did not have a spittoon but spit the tobacco juice out the door into Grandmother’s flowerbed.

Now he picked up the first fish, laid it on the sawhorse and cut this way and that, dressing the fish and slicing off neat white fillets. The bones and guts were pushed to the side and the meat went into the pot of clean water. One after another Grandfather picked flounders out of the bucket, cleaning them and tossing the white fillets into the pot. Every so often he’d pause just before grabbing the next fish, and give his blade a few swipes across the sharpening stone. When all the fish had been cleaned he folded his knife closed and rolled up all the scales, guts and waste in the newspaper. I don’t believe there was a limit on flounder so Grandfather caught all he could on the incoming tide. There was a limit on trout, though.

I adored Gramps. He taught me how to hunt, fish, paddle a canoe, and camp and cook outdoors. We saw eye to eye on almost everything except bag limits. I obeyed the law but he didn’t. Not always. The state had just stocked Swan Pond with a few hundred ten and twelve inch brook trout and Grandfather and I found them schooled up near the shore where the overflow from a natural spring dribbled into the pond. The trout had not dispersed but were hanging there right at the edge of the cold water. They were hungry and feisty and we had a grand time catching them. We had our limit within an hour; but Grandfather kept right on fishing, catching extra. I was young and foolish and a little conceited and thought I knew better and laid my rod in the bottom of the canoe. Grandfather said something like “They’ll never be any easier to catch” and tossed his line back into the water. He wore hip boots and when he rolled down the tops, the boots formed a kind of pocket around his legs. He slipped his bonus trout into those folds in his boots. If we did chance to meet the warden, Grandfather would gladly show him the fine legal trout inside his creel. I didn’t understand and I challenged him on taking so many fish. He didn’t say much, just that you should catch what you can when the time is right. All those trout piled up in Gramps' bait pail were pulled out and cleaned and slid into Grandmother’s chrome pot filled with clean water. Knowing them, I suspect they got at least two maybe even three or four good meals out of those trout. Grandmother would have used different recipes so they didn’t get tired eating them.

The years went by. I went off to college and Grandfather and Grandmother began to show their age. Eventually I came to realize that my Grandparents lived below the poverty line. Like many elderly in Maine they had little money in the bank and managed to get by on meager Social Security, some charity, assistance from my parents, and their own resourcefulness. They were proud people. Grandfather was born in 1893. Game laws and legal limits were just being talked about when he was a boy. He grew up in a world where wild game was there for anyone to harvest. For him, taking a few extra trout was like putting money in the bank. As I said, he went fishing or clamming or berry picking almost every day with decent weather. He brought home a lot of fish and he and Grandmother ate every one of them. When I was quite young I thought I knew a lot, but as I grew older I decided I didn’t know everything.