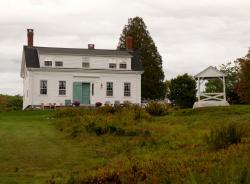 View all of the murals inside the Cornelius Tarbox, Jr. House

The Cornelius Tarbox, Jr. House, a well-preserved circa 1850 Greek Revival house, overlooks Tarbox Cove on the south end of Westport Island. The house has witnessed many passages on the island.

Distinguishing it from other island houses of its time is a panoramic narrative mural contained within its front stairway hall. The floor-to-ceiling mural contains eight painted panels that create a colorful coastal seascape which extends through the front hallway and up the stairwell.

The name of the house stems from its builder, Cornelius Tarbox Jr. (1785-1858). Tarbox’s business interests related to the land and sea in proximity of the house. He was a farmer and merchant mariner, with shares in various trading vessels made in nearby shipyards. A store that Tarbox operated on the waterfront below his house connected Westport Island with cities along the US coast and beyond that stocked it with goods. The remains of a substantial stone wharf still survive on the waterfront near the house. Commodities that were traded likely included dried fish, granite, lumber, and ice among others.

Cornelius Jr. died in 1858, and his son William F. Tarbox died in Nova Scotia in 1865. His son was later buried with his parents in the family cemetery not far from the house. Cornelius’ wife, Ruth Jewett Tarbox died in 1866.The murals were likely created after 1850 and before Ruth’s death in 1866 and may relate to Cornelius Jr., his wife, Ruth, and their youngest son, William F.

The mural presents an enigma. While it does not appear to represent a random series of eight contiguous scenes, the overall message or meaning behind the scenes remains a mystery. It is tempting to posit that there is a coherent story linking the murals, but what is it? 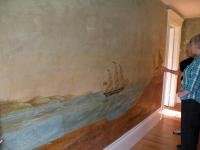 The painter is thought to have been an itinerant painter, a theory that was confirmed in 2017 by a story or legend surrounding another mural in the Five Islands Baptist Church in Georgetown. The painter of this mural, also unidentified, is thought to have completed the mural in the church in the 1860’s, and then disappeared in the night. This church mural also depicts a vessel -- a schooner in this case -- heading toward a lighthouse. Art historical analysis of the two murals demonstrated that both were painted by the same artist.

Given the short distance by sea between the locations of the two murals, one must consider the likelihood that the painter traveled by boat along the coast. Who was the painter, and what other murals did he or she paint in the vicinity?

Special thanks to Bob and Callie Connor, who have owned the Cornelius Tarbox, Jr. House since 2013; Flutter Focus Photography; and members of the Westport Island History Committee.