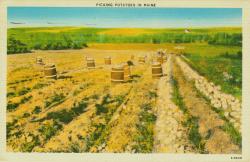 The family was up in the early morning darkness during those fall potato harvest days on my family's potato farm in Caribou, Maine in the 1950's. The smells of oatmeal and hot cocoa beckoned us to pull on our old clothes quickly and get to the kitchen. My sister Joyce, a teen-ager and the one in charge of me during the hectic six weeks of potato harvest, prodded my six year old body. "Come on, Phyllis. Be quick. We have to get to the fields early this morning." My sleepy body wanted to return to the warm, snuggly bed but no, everyone in the family had to help and even though I knew I was the smallest and youngest of the seven kids, I wanted to do my share and was pleased that my parents were trusting me to work alongside my sister Joyce in the field. When we went to the J.J. Newberry Store in downtown Caribou to get our own potato baskets and gloves, a small potato basket and gloves were purchased for me. I was proud that I would be in the fields this year.

After the hearty breakfast, the truck dropped all of us pickers off at the field. Joyce and I were given our section to pick. The potato barrel, seeming so large to me was at one side of our section. Joyce stuck the square Monopoly-like card securely between the barrel staves. Her cards had numbers on them that showed they belonged to Joyce. That night, when Dad would sort through the cards, the cards with Joyce's number would show how many barrels she picked (with my help) and she would get paid a certain amount for each barrel picked. (Wait a minute, I didn't get paid! Oh well, Joyce always bought me special treats so I shall not complain!)

Joyce and I stood by the side of the rows of potatoes, gloves on and baskets at the ready! We could hear the tractor with the potato digger behind it. It went past us, my father at the wheel of the tractor, constantly checking behind to make sure the digger was overturning the earth with the potato plants. The digger upended five rows of potatoes at a time. As soon as it passed, Joyce and I jumped into action. We wanted to pick up all of those potatoes, toss them into our baskets, then dump the baskets into the barrel before the digger returned to upend the next five rows in our section.

Joyce worked at lightening speed when she picked potatoes. She would straddle her basket and bending down in what in yoga is a table-top position, she would pick up as many spuds as she could in each hand, toss them into the basket, then grab the basket and hitch it along as her feet moved down the row. I tried to do that too but my six-year body soon balked. Mostly I picked while on my knees, hitching my basket and knees ahead as the potatoes filled the basket. When our baskets were full, they were heavy. Joyce always had to help me lift my basket up and dump it because the barrel was taller than me. Then, the digger would return, unearth more potatoes and we repeated the process.

As the barrels throughout the field became filled by pickers who were hired from town or came from Canada to work the harvest and lived in my grandparents' old house at the edge of the woods, my brothers would come with the flatbed truck equipped with a hoist. One brother drove, stopping alongside each barrel and the other one on the flatbed would life the circular hoist over each barrel, attach it securely and by pulling a lever, the hoist would hike the full barrel of potatoes up to the flatbed where it took its place in line with all the other barrels. Once the flatbed was full, my brothers would take the cargo to our farm's potato house, a long, low barn built into the side of the hill. There, my brothers and other help, would transfer the barrels to the potato house. Barrels full of potatoes are very heavy so the workers got them into the potato house by lifting it onto it's side, and sliding it with a hand-over-hand circular motion into the potato house. Once in th
e potato house, the potatoes were sorted and sold to various exchanges and markets.

My father sold the potato farm when I was still quite young so my experience as potato picker is scant. However, recently I conversed with my nephew Thom Blackstone who was raised on the same land where our family farm stood. He remembers picking potatoes in the 1970's on our cousin's farm in exactly the same way. By then, potato harvesters had been invented but the first ones were not as developed and many accidents occurred. So many farmers continued to use manual help. Today, in the 21st century, potato harvesters are improved, safe and widely used. With so many family farms being merged into potato corporations in Northern Maine, the need for so many gloved hands picking manually on the family farm no longer exists and has become a story of the past.

What did my six-year-old self learn from that early experience of the potato harvest on the family farm. I learned that everyone has to help, and I was proud to do so. I also learned that work is hard and hey, I could do hard things!