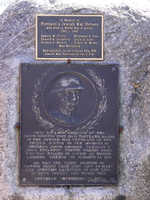 More than 2,000 people gathered on Portland's Eastern Promenade on a Sunday in September 1935 to honor Jacob Cousins. Jacob was twenty-five years old when he was killed in October 1918, less than a year after he enlisted in the U.S. Army.

A memorial boulder bears his image and the Jacob Cousins Post #99 of the Jewish War Veterans of the USA bears his name, a reminder of the first Portland Jew to die in the Great War. (1) In 1896, a group of Civil War veterans formed the first Jewish veterans' organization in the United States the Hebrew Union Veterans to alter public perceptions that Jews were "cowardly" or "disloyal." The organization changed names as it added veterans of other wars. After World War I, it became Jewish War Veterans of the USA, and its mission, in Maine and elsewhere, was to defend Jews "against the canards of anti-Semites who continue to declare that Jews have not served in the U.S. Armed Forces" (2) as well as to provide support to veterans and their families.

Cousins is one of five Jewish soldiers to have a veterans' post named for him. The other posts are the Milton J. Ward Post JWV #484 in Auburn; the Osher-Edelstein JWV Post in Biddeford, in honor of Louis Osherowitz and Albert Edelstein; JWV Post #507 in Bangor; and, the Martin-Klein American Legion Post #133 in Fort Kent, which was named after Jewish soldier Kenneth Klein and Franco-American soldier George F. Martin.

Numerous veterans' organizations have existed in the U.S. The Jewish War Veterans (JWV) is the oldest group and as of 2016 has 37,000 members. Among the other well-known organizations, the Veterans of Foreign Wars is the next oldest, founded after the Spanish-American War and Philippines intervention to help veterans and their families get medical care, pensions, and other services.

The American Legion began in 1919 to advocate patriotism and honor and to promote national security. At least one other religion-based group exists, the Catholic War Veterans, founded in 1935 to fight communism and other "isms" that threatened Christianity.

The JWV is unique in its focus on demonstrating that Jews have been soldiers, are patriotic, and have fought in all wars since colonial days. The Jacob Cousins Post was part of that effort, but also served a much larger function within Portland's Jewish community.

When the crowds gathered on the Eastern Promenade in 1935 to dedicate the monument and the JWV post, the Portland Press Herald reported, "Colonel Mendelsohn, who lost an arm in the Spanish-American War, said that the patriotism is the guiding star of the American Hebrew. 'In deeds of daring in the World War the Jewish soldier was second to none.' "

"Jacob Cousins left a torch for us to carry," Jean Mathis of New York, a World War hero, told the crowd that included the mayor, state representations, and national JWV officials. (3)

Mathis quoted the JWV mission statement when he said, "Jacob Cousins gave his life to make the world safe for democracy and today we want no Nazism, no Fascism, no communism. We want pure Americanism."

On August 10, 1936, Commander Solomon Crasnick of Portland's Harold T. Andrews Post No. 17, American Legion, wrote to Jacob Cousins' sister, Esther Gerber, describing the award of an engraved saber to Victor Lebednic, "in memory of Jacob Cousins, who gave his life for his country on the field of honor." Lebednic was the outstanding Citizens Military Training Camp candidate for that year.

The Post and the Portland Jewish community were quite active from the 1930s to the 1980s. Synagogues were full weekly, as well as for holidays and special events. After years of fundraising and planning by the Young Women's Hebrew Association, the Jewish Home for the Aged, now The Cedars, opened its doors in 1929. The Jewish Community Center purchased its new building on Cumberland Avenue in 1938 and was buzzing with community enterprises. Zionist, civic and literary groups proliferated.

The Cousins Post held flag dedications, Memorial Day worship services, and sponsored community events such as Yom HaAtzmaut, Israeli Independence Day. In May 1936, the Post sponsored the first memorial service for Jews who served in the Army and Navy. Attorney Jacob H. Berman spoke on behalf of the Post and Rabbi Mendel Lewittes was the officiant. 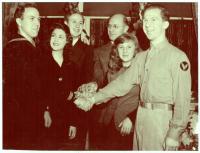 Also in May 1936, an auxiliary was formed with Mrs. Maurice Davis as president. Among other projects, the group developed an extensive hospital service for veterans at the Portsmouth Naval Hospital in Kittery and the Marine Hospital in Portland.

James "Jim" Friedlander left home at the age of sixteen and joined the Navy at seventeen. Many years later, at the age of eighty-nine, he is commander of the Cousins Post. In recent years, Friedlander and the current Quartermaster, Melvin "Mel" Stone, ninety-five, have been the twin engines of the group. Stone was a leader of the post for many years, especially in the 1980s and 1990s. They have both been active in different capacities for decades and are still going strong.

Another active member is CAPT Lee Tabenken, USN (ret). Following flight training, Capt. Tabenken was awarded his pilot wings in July 1984. Over the next 30 years, as a Navy pilot he served in support of Naval operations throughout the world including support of 6th fleets assets, the Worldwide Military Command System, Operations Allied Force, Noble Eagle, and Enduring Freedom. In 2010 he also completed a three year tour in the Office of Chief of Naval Operations.

The Post no longer sponsors community activities. It likely will be decommissioned when the remaining active members step down.

Last of the Jewish WWII veterans