Those Who Gave Their Lives: World War II

At least twenty-three Jewish men from Maine died in the military during World War II. Photographs and other memorabilia are available for fewer than half of them.

Because most were young and unmarried when they entered the service, few of these soldiers had children and many had no close relatives who kept information about them. In addition, many families have scattered around the United States.

Three sons of Llewellyn and Ida Solomon of Coopers Mills served in World War II. Two of the three were killed – two months apart – when their planes were shot down.

Frank B. Solomon joined the Royal Canadian Air Force before the United States entered World War II. He was later transferred to the 8th U.S. Army Air Force as a first lieutenant.

T. Sgt. Charles L. Solomon, part of 553rd Bomber Group, 386th Bomber Squadron, had been injured in July 1943. He wrote to his parents in Coopers Mills that "they pared some skin from me delicate little belly, and glued (I think that's how its attached) to my shell-like ear." (6) Four months later, he was reported missing over northwestern France. 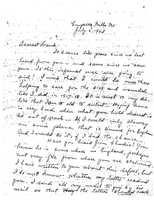 On December 27, 1943, his mother sent a telegraph to Frank, saying, "We are frantic with worry. Why don't you write? Cable us if you can tell us anything more about Charles." (7)

Charles Solomon's death date is reported as November 5, 1943. He was buried at the Normandy American Cemetery in France.

Frank Solomon was reported missing the night of January 1, 1944, on his 26th operational mission, an air raid over Berlin. He reportedly died January 2, 1944 and is buried at Ardennes American Cemetery in Belgium.

His mother received several letters about her son. One written before his death had been confirmed was from the Methodist chaplain of the unit. He wrote, "I knew your son very well and had a great admiration for him both as a pilot and as a man, and it is perfectly true to say that he was one of the most popular officers in our mess." (8)

A third son, David, entered the service at about the same time his brothers were reported missing. He was training at Camp Ritchie, Maryland, in military intelligence. In September 1944, a family friend, M. Lincoln Schuster, of Simon and Schuster Publishing, wrote to Adjutant General J. A. Ulic in Washington, D.C., asking if he could help keep David Solomon on the east coast.

Llewellyn Solomon had died early in 1944, leaving Ida Solomon a widow, mourning her husband and two of her sons.

Sam Citrin was born in Portland on April 1, 1913, the fourth of five children born to Eva and Jacob Citrin. The family members were very observant Jews and Samuel was a lifelong member of Shaarey Tphiloh Synagogue in Portland, Maine.

Citrin graduated from Portland High School in 1931. The Totem lists his many activities: sports, French Club, Classical Forum and Cadets. His military enlistment record states he had three years of college to his credit, but it is unknown where. His yearbook entry says that he wished to attend the University of Maine.

Citrin passed the Maine State Bar Exam and was admitted to the Maine Bar. A business card announced the opening of his office for the general practice of law at 411 Fidelity Building in Portland.

On November 15, 1940, Citrin married Marjorie Ethel McLean. Shortly thereafter, he enlisted in the Army as a warrant officer and was stationed at Fort Williams in Cape Elizabeth.

In mid-January he became ill with spinal meningitis. He was given one dose of sulfa, a new treatment. He responded to the drug, but then relapsed and died on January 23, 1941 at Fort Williams Hospital. He is buried with his parents and other family members at Mt. Sinai Cemetery in Portland.

Meyer Davis was from a performing, artistic family that lived in Maine and traveled the world. Meyer Davis, Sr., his father and a famous society band leader, had a home with his family for many years in Sorrento, where he was in great demand among the many famous Maine coast summer residents.

Hilda Emery Davis, Meyer's wife, was born in Bar Harbor and converted to Judaism when she married Meyer. A composer and musician, she wrote an autobiography, "In Time with the Music" that details their family and professional lives.

Meyer's brother, Garry, also in the military during the war, was so disturbed about his actions as a bomber pilot that he renounced his American citizenship and founded the World Citizen--Mundialization World Cities--movement.

Meyer, Jr. was so young when he died that there is very little information about his life. The Fogler Library in Orono and Northeast Historic Film in Bucksport hold the Davis Collections. There are many films, photographs, plays, letters and other interesting items that detail the family's life. 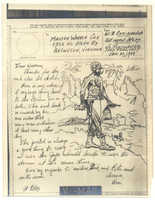 Benjamin A. Cox was a Lieutenant in the United States Army, enlisting in April 1942. He was part of the Bougainville Campaign in the Solomon Islands leading a platoon in a counterattack against the Japanese when he was killed by machine gun fire on March 20, 1944. His body was recovered and interred in the Island cemetery, and he was awarded the Purple Heart.

Ben was born in Portland on March 20, 1916, to Jacob and Sarah Cox. They had emigrated from Russia around 1900 and lived at 49 Parris Street in the Bayside section of Portland. Jacob's name was Y'chiel Krakovsky and he was born in Slutsk, Russia. Born in Ekaterinsslav, Sarah's maiden name was Tiernofsky.

The Cox children were Samuel, Oscar, Sidney, Rose, Benjamin, and Morris. Oscar Cox, of Washington, D.C., worked in the Franklin Roosevelt administration and was the author of the Lend Lease Act.

Morris, who served stateside in the Army during World War II, was clerk of the U.S. District Court in Portland and was active in the Jewish community. He was a member of Shaarey Tphiloh Synagogue in Portland.

Sidney of Silver Springs, Maryland, worked for the U.S. Treasury Department. Rose married Sam Goldsmith and they had a sporting goods store in Old Town.

Before his enlistment, Benjamin had studied medicine for four years at the University of Edinburgh. He was known by his family as "the golden boy."

In a letter to his brother Oscar, Cox wrote, "Now for the most important thing if it is not rationed how about some Calumet or Clabber Girl baking powder. Out here every man is his own cook and the G.I. baking powder doesn't work so well in pies or cakes. If you don't think that I can make good pies or biscuits wait till I get back and will give a demonstration. Will write Louise soon so give my regards to the boys and write soon. Cheerio, Ben Cox." (10)

Taken by Hyman Deletetsky at his home in New Auburn, ca. 1943

Taken by Hyman Deletetsky at his home in New Auburn, ca. 1943

Hyman Deletetsky was killed March 7, 1945 in Germany; his body arrived in Maine at the Lewiston Central Railroad Station over eleven months later and was soon taken to Beth Abraham Synagogue on Laurel Avenue in Auburn.

Hyman enlisted when he was a junior at Edward Little High School. Three of his seven brothers also served; they all survived.

When he was still at home, March 31, 1941, he wrote a letter to his older sibling Lawrence, asking him to send a photo of his big brother in uniform. He reported to Lawrence how cold it was at home and that the week before he had sent in his application for his driver's license. He said he would take his test the following Thursday morning. "Don't send any money because I paid for these already and I paid for them myself," he wrote to his brother. (11)

After Hyman's death in 1948, his father, Myer Deletetsky, 133 Third Street, Auburn, was notified by the Veterans Administration that as Hyman's beneficiary, under the amended National Service Life Insurance Act of 1940, he would receive monthly payments of $56 for life with "179 installments certain." Hyman's youngest and only surviving brother, Milton, has had his Purple Heart. Milton died January 31, 2016.

Milton Ward was born in Auburn, January 3, 1913. A 1st Lieutenant in the Army, he served as a member of the 1st Battalion, 276th Infantry Regiment, 70th Infantry Division. He was killed in action February 20, 1945 in Forbach, France.

Certificate commemorating the founding in Auburn of the Milton J. Ward Post #484, 1946

Certificate commemorating the founding in Auburn of the Milton J. Ward Post #484, 1946

After his success at Columbia, Ward returned to Auburn and married Frances Tabor in 1942. His son, Donald Ward, was born in 1944, several months before his death in France. He met his young son only once when home on leave.

Milton’s older brothers owned Ward’s Department Store in Lewiston and there were times when he helped out there. Milton was a lover of music, a singer and a talented writer.

The Milton J. Ward Post #484 in Auburn, one of four in Maine, was dedicated in his honor. Beth Abraham Synagogue on Laurel Avenue in New Auburn owns the certificate commemorating the founding of the post in 1946.

Striar, born December 23, 1921, was the fifth of the six children of Shifra Shapiro and Boruch Striar. Striar had one sister and four brothers.

Beb, as he was known, grew up in a large home on Adams Street in Bangor.  His father was a cattle dealer who scoured the countryside looking for cows to purchase for slaughter.

Though the family was quite poor, Boruch and Shifra Striar hired a rabbi who visited the house to give the boys an Orthodox Jewish education. They studied well beyond their Bar Mitzvah years.

Bernard, a 1939 graduate of Bangor High School, was a sports enthusiast. The yearbook predicted he would become a sportscaster.

He had an after-school job that had been handed down to him by his three older brothers – working as a bellhop at the Windsor Hotel on Harlow Street.

Unlike several of his older brothers, Bernard did not plan to go to college. His skills and interests centered more on working with his hands.  At the time he was drafted, Bernard was an apprentice to a local watchmaker.

He also did bas-relief sculpting.  One piece was of the family dog, Acquin, and another of a policeman looking through a fence. He developed this skill with the help of a man who worked at the electrical substation near the Beth Abraham Synagogue on York Street in Bangor.

He was drafted into the army as an infantryman at around age nineteen and was killed in action on September 29, 1944.

Last of the Jewish WWII Veterans