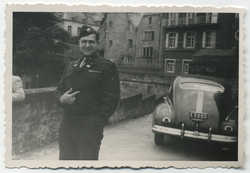 In 2015, Mel Stone, 95 years old and living in Portland, recalled his very exciting and varied military experience. Listen to Mel as he describes his training and a send off by Franklin Delano Roosevelt, as the recently trained men left for Europe. Once in France, they advanced to Belgium, the Netherlands and the Rhine Crossing where he assembled boats and ferried Canadian troops across the river, under fire. Once in Germany, he strengthened bridges and then rebuilt them. They then followed the 9th Army, then Patton's 2nd Armored all the way into Czechoslovakia and then into the path of the advancing Russian Army.

Listen to Mel's account of visiting a liberated concentration camp 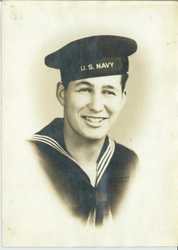 Jim Friedlander, who went on to a long career as an urban planner, institutional fundraiser, bed and breakfast proprietor and more, started out as a 17-year-old naval enlistee in 1944 from New York. He was trained as a quartermaster in the areas of navigation and signaling. Later, he worked on a small wooden minesweeper that assisted in clearing explosive mines from small harbors and offshore coastal landing areas. Looking back from age 90 (in 2015), he remembers those days with a sense of humor, pride and accomplishment.