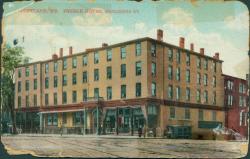 Since the establishment of the area's first licensed hotel or rooming house, Seacomb’s Tavern in 1681, Portland has had a dramatic, grand and boisterous hotel tradition.

The Portland hotel industry has in many ways reflected the growth and development of the city itself. As Portland grew with greater numbers of people moving through the city or calling it home, the hotel business expanded to fit the increasing demand.

Stagecoaches provided the earliest means of land transportation to connect the city with its neighbors. From 1818 to 1832, Portland’s single stagecoach line grew to an impressive network of 12 lines with five stages arriving in the city daily. This growth brought about the city's first hotel "boom" with the opening of The American, Cumberland and Elm in the 1830s. These three hotels were conveniently located near the major stagecoach stops in the city, putting them in a prime situation to capitalize on the influx of travelers.

The great fire of 1866 that ravaged much of the city also had its effect on the hotel industry. Although few hotels seem to have been destroyed in the fire, both the St. Regis and the Falmouth were built on sites that had been recently cleared by the savage flames.

As time marched on, the railroad came to Portland and by the 1890s two hotels, the West End and the Westfield, opened right across the street from Union Station. Closer to the downtown, three large hotels, the Chase, Congress Square and the Columbia, also opened during this time period. These were followed in the early years of the 1900s by a good number of other hotels, including the Eastland.

While most of Portland's hotels have had colorful and lively celebrations marking opening day, many of these same hotels closed their doors with considerably less panache. Some, including the Chase and United States, shut their doors only to reopen later as other businesses. Although, for the most part the closure of a hotel led to the demolition of the entire building. In 1923, the once elegant Preble House was torn down to make way for a new twelve story office building. In the thirties, both the West End and Florence were leveled. In 1963, the storied Falmouth was demolished, and a parking lot took its place. In 1972 the St. Regis was demolished to clear the way for the Canal National Bank Redevelopment project and in 1985, the Plaza met a similar fate. The Lafayette, however, managed to survive and although the hotel is no longer operating, the building still stands as of 2015.