The Washburns of Livermore: A Maine Connection to the Civil War 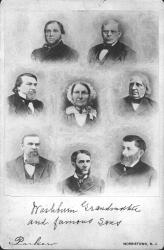 The effects of the United States Civil War were far reaching. Whether from a large, metropolitan area or a rural Maine town, those on the front lines, to those sending them there, and those who wished for safe return back home were impacted by the war.

The Washburns, like many other families in Maine and the United States, were important on a number of different fronts. The family patriarch, Israel Washburn, went through a period of financial struggle when his dry goods store was foreclosed on.

The Washburns turned their tragedy into triumph and during the Civil War era held positions and had influence that transcended their small community and reached into a much larger national forum.

Their story, told through historic letters and images are direct in their message -- the importance of family and individuals during the Civil War.

A large family from humble beginnings, the Washburns came to prominence primarily in the political arena. After serving their small community the family spread its sphere of influence during the Civil War era.

Israel Washburn Jr., eldest son of Israel and Martha "Patty" Benjamin Washburn, was a member of the U.S. House of Representatives from 1853-1861 and governor of Maine from 1861-1863, during the Civil War.

The two-term governor was known as "Maine’s Little Giant of the Civil War" for his ability to help the state and nation mobilize for war. His correspondence with his younger brother, Elihu Washburne, congressman from Illinois and friend of President Abraham Lincoln, provided Governor Washburn with a channel to gain insight into the war and the state of the nation during a time of great turmoil and upheaval.

Elihu Washburne returned what he believed was the original "e" to the end of his last name.

Samuel Washburn, brother of Israel and Elihu, found another way to influence the war and support his nation. He rose through the ranks on various shipping vessels to become captain of the gunboat Galena.

Samuel Washburn's frequent letters to his brothers in office gave a unique perspective of the war. His correspondences were often blunt and unrestrained, particularly about his commanders and fellow sailors. Samuel's letters were a stark contrast to those of his siblings in politics, providing them with a realistic and fresh view of the war.

Their sister Caroline Washburn Holmes found herself in a supporting role during the war. Her husband, Dr. Freeland S. Holmes, was a military surgeon for the Union Army and eventually died in the service of his nation.

Their constant communication during the war allowed Dr. Holmes to escape the reality of the war and interject himself into the mundane tasks of the home front. Their letters often referenced tasks around their home, patients that Dr. Holmes treated, or money that needed to be sent or received.

It is clear from the letters that they cared deeply for and admired one another. The letters have a different style and tone from those of the Washburn brothers. 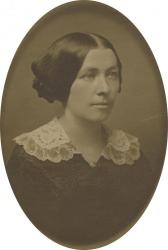 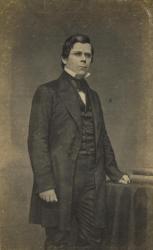 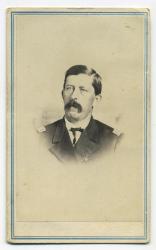