When the first shots of the American Civil War were fired on Fort Sumter, South Carolina, in April 1861, the people of Bethel generally stood neutral on the issue of slavery. 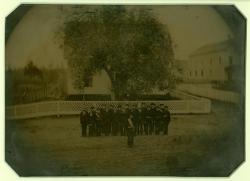 Nevertheless, Bethel responded to the call of war, as did other Maine towns.

However, Bethel's support of Union forces was not limited to the soldiers it sent out. Local citizens supported the men on the front lines in many ways.

For instance, some 50 women formed the Ladies Union Aid Society, which sent pillows, handkerchiefs, shirts, towels, dried fruits, and many other materials to soldiers.

The ladies' efforts were perhaps one of the most visible illustrations of Bethel's support for the Union cause.

The Civil War years in Bethel also "marked the greater industrialization of the town, the growth of the summer tourist trade with many hotels and boarding houses being established throughout the town."

Even the Ladies Union Aid Society employed industrial methods to provide aid to the front line. On June 6, 1862, according to the group's minutes, "two ladies came in with sewing machines, aiding greatly in forwarding the work of making shirts and drawers." At the time, most work was done by hand.

Also during the war, an outbreak of smallpox affected the town. In February 1863, a soldier was reported to have carried the disease home with him.

During the course of the war, about 16 percent of soldiers from Bethel died. But 47 percent of the town's 180 soldiers never returned home because they settled elsewhere.

The Homestead Act of 1862 granted federal land to people from the Union. As the soldiers went to other places in the United States, they discover much better land for agricultural purposes, as well as many job opportunities. This situation was common for the State of Maine as a whole.

One hundred eighty men from Bethel served in the Civil War. About 16 percent died during the war.

The Ladies Union Aid Society, formed in late 1861, was the main source of local goods and other aid to soldiers.

The war brought new industry, tourism, and a larger consumer economy to Bethel.

Some suffered financially during the war, and the population of the town suffered at war's end.

Remembering Those Who Served

From flowers and other decorations on graves to a monument, Bethel remembers its Civil War Soldiers.