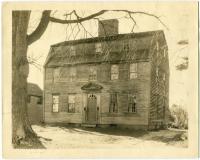 With his appointment as Royal mast agent, Captain George Tate (1700-1794) emigrated to colonial Portland in 1751 to oversee timbering operations in support of the British Navy. In this prominent position, he helped shape the economic and social affairs of Falmouth in Casco Bay (as Portland was known until 1786).

Tate lost his authority at the start of the Revolutionary War, but his descendants helped develop the thriving Federal seaport.

His sons – both American patriots and English Tories – lived both famous and ordinary lives. Their networks established through marriage and business helped advance the family legacy here and abroad. In the early twentieth century, descendants supported the preservation of the George Tate House, a National Historic Landmark.

Prior to emigrating, Tate had captained mast ships, transporting timbers from the Baltic Sea to the Thames River in London. When the British Admiralty reassigned him to Maine, Tate, his wife, Mary, and their four children sailed from their home in Rotherhithe, a seafaring neighborhood in South London, to Maine.

Upon his arrival, Tate built a wharf and a warehouse, where he lived and ran his business, until the family’s new house was ready in 1755.

Elizabeth Hopkins, a member of the Class of 2015 at Skidmore College, majored in Anthropology. Laura Fecych Sprague is the Consulting Curator at Tate House Museum and Grace Batsford is the Museum Assistant.

Beginning in 1685, Great Britain supported a surveyor-general in New England to identify trees that were to be reserved for the Royal Navy.

Captain George Tate built a house commensurate with his economic and political station.

Tate's loyalty to the Crown is reflected by his merchant activities and affiliation with the Anglican Church.

After Tate lost his position as mast agent following the Revolutionary War, his sons followed in similar footsteps as their father.

The Tate legacy descended in the Ingraham family, who contributed to the preservation of Tate House in the 1930s.