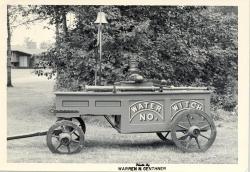 Text by Jean M. B. Lawrence

While the Town of Waldoboro received its charter in 1773, the need for fire protection in the village proper did not come to a crisis until 65 years later.

In 1838, Waldoboro's businesses were housed primarily in wooden buildings, and the owners realized that the sites of their livelihoods were in great danger from fire. Since the town itself covered a large area, it became clear that the outlying districts would not vote to underwrite village protection.

Hector M. Brown and George D. Smouse, two local business men, raised funds by private subscription to purchase Waldoboro's first fire engine, the Water Witch. With this purchase, 22 men, many of them the town's leading citizens, volunteered to form a company to train to use the engine in time of fire. 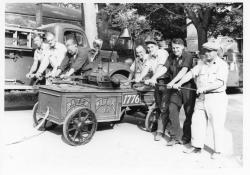 Under the leadership of General William S. Cochran, who served as foreman of the group, the men practiced using the machine until Cochran was able to report to the selectmen "a true list of the men now belonging to the engine company in this town, all of whom regularly do their duty."

The formation of this company of volunteers marked the beginnings of the 175 years of fire service that the town celebrated in 2013. A partnership between firefighters and the citizens of Waldoboro developed and grew steadily, its primary concerns being not only safety education and relief from fire devastation but also care and concern for the children of the town.

The Water Witch machine, imported from England, arrived in Waldoboro after having served at the Old North Church site for the City of Boston. The engine is six feet long and two and a half feet wide. 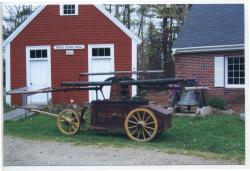 The zinc-lined compartment in the rear was filled by bucket brigades and was pressured by six men, three pumping on each side. Its stream was capable of reaching 94 feet and the tank held about a barrel of water. It was pulled by men, not horses, and had two rope handles on the rear for men to grab hold in order to keep the machine from getting away when going downhill.

The Medomak, a secondhand Hunneman engine, was purchased after the 1846 fire that caused $50,000 in damages, took 16 to 20 stores, a bank, the offices of four lawyers and three doctors; two harness, one tailor, and two milliner shops; the Odd Fellows and Masonic Halls, and the post office.

The Medomak's purchase price was guaranteed by the signatures of 27 local men who pledged from fifty cents to three dollars "defray the expenses of the Medomak Engine Company, recently started: purchasing necessary hose and other fire apparatus, repairing engine and other incidental expenses."

Captain Benjamin Roberts was sent to Boston to purchase the tub, and it was brought by coaster, landed on the ice, and hauled to the village. 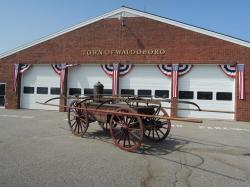 Both engines were used when fire took three village sites in 1849, and in 1850 when a conflagration that exceeded half a million dollars almost leveled the village. The post office, two banks, the Custom House and 37 stores were destroyed with 70 families left homeless. Because the fire hit the village during a prosperous time, the town was rebuilt in less than a year's time.

In 1872, Captain L.L. Kennedy traveled to Boston to purchase the second-hand Smith Tub engine known as the Triumph. This engine was used along with the Medomak and is mentioned in the news coverage of the 1890 fire when the Union Block on the corner of Main and Jefferson Streets was destroyed.

A second fire on the same site took place in 1962 when the entire block housing Gay's Store burned. The Triumph was housed in an Engine House on Glidden Street near the Custom House.

Another volunteer group formed to train for its use and to support equipment. A portion of the support came from renting the upstairs room for town events and meetings. 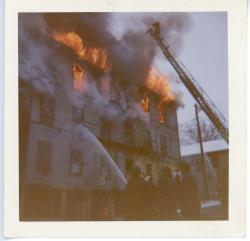 No trace of the Engine House remains, but Alan Eastman created an artist's rendering of the house, based on first-hand recollections of citizens, for the 2013 celebration.

By the turn of the century, fire wards were elected at town meetings and volunteers were paid a small sum to fight fires. The Engine House on Glidden Street became the home of the first town-purchased fire truck. The town office was located upstairs.

This served until the early 1950s when the town built the American Legion Hall on Jefferson Street as a fire station, town office and town maintenance building.

In 1964, the town appointed Robert Maxcy, Richard Glidden and Michael Lailer, its first selectman-appointed chief, deputy chief and assistant chief, respectively. Maxcy served for 42 years and was followed by Glidden, who, though retired by 2013, continued to drive an engine when needed.

Following Glidden as chief was Ernest Vannah, who joined the department in 1973 and, as of 2014, was the only living member to have served in every position. Upon Vannah’s retirement, Paul Smeltzer was appointed to lead the department and was the chief in 2014, with Dale Smith as deputy and William Maxwell as assistant.

Several members of the department have been honored for saving lives both as a result of local fires and out-of-town incidents to which they responded. Waldoboro belongs to the Mutual Aid Group that allows Knox and Lincoln County departments to offer support to one another in times of emergency. These same departments share training exercises.

Waldoboro was one of five municipal departments in 2013 to earn the Safety and Health Award for Public Employers.

Members of the Fire Department have been closely connected with outreach projects for the town since its inception. For years they assisted in the installation of Christmas lights and the Waldoboro Day banner in the village, provided a Santa Claus to give candy and fruit to local children, have given fire safety programs in schools, and have aided the Waldoboro Food Pantry, among other community activities.

As General Cochran wrote in 1838, "all (firefighters of Waldoboro) still regularly do their duty."

Jean Lawrence is president of the Waldoboro Historical Society.