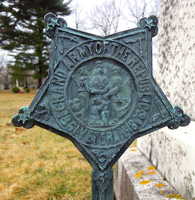 The rural cemeteries of Portland and Westbrook are the final resting place of over 2,000 local men and women who served during the Civil War.

Many veterans’ gravestone monuments reflect experience and sentiment regarding the war, as do the written words of many of those buried here.

Evergreen, Pine Grove and Woodlawn cemeteries all were within the bounds of the City of Westbrook in 1861. Evergreen and Pine Grove became part of Deering when that city was formed in 1871. 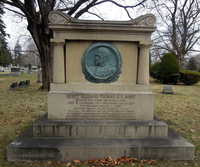 City lines were re-drawn again in 1899, and Evergreen and Pine Grove fell within Portland.

Popular humor after 1900 was to claim that one could be born in Westbrook, married in Deering and die in Portland without ever having moved.

Monuments of the Civil War veterans in the three cemeteries range from the simple Grand Army of the Republic (GAR) marker to the imposing sarcophagus indicative of a man of high military rank.

Masonic motifs are found on many veterans' stones, usually in the form of the square and the compass. Numerous local men joined the fraternity while in service, often for the potential benefits Freemasonry offered on and off the battlefield.

Excerpts from letters home were important enough for families of local Civil War veterans to inscribe them on monuments. The inscription of Capt. George W. Thompson, of the 34th Massachusetts Infantry reads: 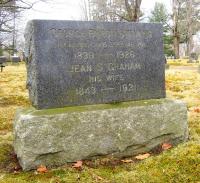 I am not afraid to die, If I had a
thousand lives, I would freely give
them all for my Country and my friends
For myself all I deserve is thee
Plaudit: well done.

When veterans died long after the war, families were less apt to elaborately commemorate their loved one's service in the Civil War.

Lt. George B. Stevens, whose experiences in the war are detailed in his letters to his wife " Jennie," died in 1926. His stone lists his rank and regiment, but does not mention other details of his service, nor does it have Civil War patriotic imagery.

By the close of the 19th century, Victorian sentimentality in memorialization gave way to a more practical and less ostentatious style.

Close examination of the stones and memorial markers in Portland and Westbrook cemeteries evoke the memory of the dead and reveal the lives and times of the Civil War figures interred.

Masons in the War

Flags and swords, usually draped or crossed, generally are for those who died in service, and often are underscored by heroic verse. This stone is on the grave of John Forsythe, who died at Petersburg.

Victorian sentiment equated death in war with heroic virtue. The inscription on Haynes' monument reads "Weep not for him/ Who for his country/ Dies."