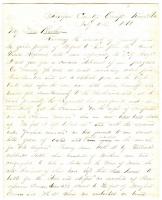 Letters home from soldiers gave families and friends in Belfast first-hand accounts of how the war was going. Most soldiers spent their idyll hours penning letters to loved ones and expected their recipients to write back -- and write often. Two weekly newspapers reported the battles and the movement of both Belfast and Maine regiments.

Alden D. Chase, businessman of Belfast and member of the Belfast City Greys, enlisted with many of his comrades with the 4th Maine Regiment in May of 1861.

Chase, who was 39 years old when he enlisted, was sent home in July, due to illness. Just before returning to Belfast, he wrote to his brother Hiram to relay the news of the 4th’s progress since leaving Maine. At the end of his letter, he alluded to an upcoming battle -- most likely Bull Run, which was fought on July 21.

William Austin Burgess was a corporal in Company D, 59th Massachusetts Infantry. He was born in Belfast, but was working in a shipyard in Charlestown, Massachusetts, when, on February 9, 1864, he answered his country’s call for men. 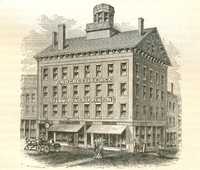 The Republican Journal newspaper was published here during the Civil War years. It was later the home of the Progressive Age newspaper.

The Republican Journal newspaper was published here during the Civil War years. It was later the home of the Progressive Age newspaper.

Burgess wrote often to his sister and brothers in Belfast and in those letters he told them of his battle experiences, a minor head wound, and his appreciation of receiving news from home.

On July 15, 1864, he wrote to tell them of a severe chest wound, a result of a rebel sharpshooter.

His last letter, sent on August 12, was dictated to a fellow patient in Saterlee Hospital, outside Philadelphia, Pennsylvania, and mailed to William’s sister, Harriet Towne. William A. Burgess died on Sunday, August 14. He was 26 years old and unmarried.

Belfast citizens kept up with the latest news from the front by reading either the Progressive Age or the Republican Journal newspapers.

Each paper was only four pages, but at least two, sometimes three pages, were devoted to the reporting of battles and reporting those killed, wounded or missing. By the second year of the war, the two newspapers held very different opinions about the war effort and about President Lincoln’s continued calls for hundreds of thousands more soldiers.

In the July 11, 1864 edition of the Republican Journal, a pro-Democrat party newspaper, editor and owner William H. Simpson wrote a scathing denunciation of the president’s latest call and wondered how many more young men were needed for the slaughter.

Simpson was indicted and arrested for using treasonable language and inciting resistance to the draft. Charges were later dropped, but Simpson voluntarily shut down the newspaper for a year and a half.

William R. Rust, the editor of the Progressive Age, a pro-Republican party newspaper, responded to Simpson’s scathing editorial by comparing him to a big rat that only comes out of his hole to gather up bad news and falsehood to print.

During 1861 and 1862, the only daily newspaper printed in Belfast was the Progressive Age Evening Bulletin. Thanks to the availability of the telegraph, dispatches from the war were issued in the afternoon on a one-page sheet and were either posted or read aloud in Post Office Square.

William A. Burgess letter to his sister Harriet, Belfast, 1864

William A. Burgess letter to his brother Albert, Belfast, 1864