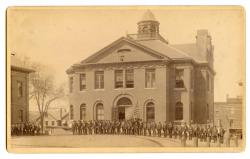 The announcement that the war had finally come to a close was met with great jubilation and celebration in Belfast.

As had been done at the outset of the war, flags flew on houses and downtown buildings, church bells rang, cannons roared and a huge crowd gathered around a celebratory bonfire in Post Office Square.

On April 10, 1865, Mayor Nehemiah Abbott proclaimed, "Fellow Citizens of Belfast It is fitting that we should exchange congratulations over the fall of Richmond, the surrender of General Lee and his army and the downfall of the Rebellion.

"To that end, I respectfully request that all stores and places of business be closed at one of the clock this afternoon; that at the hour a salute of one hundred guns be fired; that at eight in the evening all private and public buildings and places of business be illuminated; and that at eight and a half the citizen’s generally, ladies and gentlemen, assemble at Peirce’s Hall, where speeches, music and dancing may be expected."

Remembrance of the war and its effects did not quickly end. The Thomas H. Marshall Post No. 42, Grand Army of the Republic Civil War veterans’ group was organized in 1881. The post was named in honor of Thomas H. Marshall, Captain of the Belfast City Greys.

At the outbreak of the war, Marshall joined his men as they enlisted with the 4th Maine Regiment. As a leader of the 4th Maine, Marshall soon rose through the ranks.

He distinguished himself at the first Battle of Bull Run, but fell victim to a fever and died several months after the battle, at age 35. He left a widow and two young children. 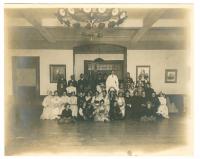 The second floor of Memorial Hall

Rather than erecting a stone monument, it was suggested that a memorial hall be built in honor of those who served and a sufficient sum was raised for that purpose.

Memorial Hall was completed, outfitted and dedicated to its various purposes on October 9, 1890.

The Post used the upper floor for meetings and reunions and the City of Belfast rented the lower levels for several municipal departments, including police and fire departments.

By the early 20th century, the ranks of Civil War veterans were rapidly dwindling and it was decided to add a more permanent monument on the Church Street side of the building.

Veterans of the Civil War

Civil War veterans met with regularity in the post war years. Reunions were held in Belfast and other Waldo County towns.