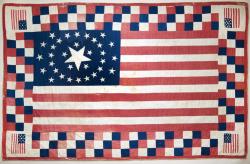 In June 1864 a group of young and unmarried women, all members of the Ladies’ Volunteer Aid Society began stitching a flag bed quilt to recognize and honor those who fought to preserve the Union. In mid July the finished quilt was sent by Express to the Armory Square Hospital, a Union Army hospital in Washington, D.C.

The quilt, larger than the standard Sanitary Commission cot quilts, features an inspirational American flag theme with a decorative red, white and blue border in a checkered pattern.

It measures 62 ½ by 92 ½ inches overall, with the flag itself measuring 39 ½ inches by 69 inches. It is made of cotton and wool and is hand-stitched with the binding sewn by machine. The backing is striped cotton typical of the era.

The border of the quilt is made of three rows of small squares anchored by complete miniature flags at the end of each row. All have thirteen hand-embroidered stars on a blue field and around each are phrases exhorting our soldiers to fight for their country, God, and their Flag. Some of the squares contain original poetry penned by the stitchers.

They include "The noisy Bird, the Northern Parrott," "Our native berry, Gen. H.G. Berry," "The right side, Our side and Burnside," and "If the rebs won’t pay, We will 'Charge em.'"

The large white star in the blue field contains the Lord’s Prayer and each of the five points contains a biblical verse drawn from either the old or new testaments. Small white stars surround the large star each representing a battle in which the soldiers from Belfast took part.

John H. Quimby, known in the community for his fine penmanship, wrote the names of the quilt stitchers on the white stripes of the flag. These names are hand written in ink and have survived, mostly clear and intact, for 150 years. The rest of the writings are done by various hands, using several different writing styles.

The top three white stripes in the flag contain the following inscriptions:

The lower stripes contain the names of the 23 women who made the quilt. It is unclear what the "U.S.G." stood for.

One of the stitchers, Augusta Quimby Frederick, recalled in later years, "When the quilt was finished and ready for the quilting we were invited to the house of Hon. N. Abbott and a picnic supper was served, to which the young men were invited. The quilt was finished during the afternoon, and was displayed in the dining room and was much admired. The following week it was sent to Washington by express, accompanied by a letter from our President Miss Arbella Johnson."

On August 12, the day the quilt arrived in Washington, a letter was sent in return from Miss McLellan, Armory Square Hospital, Ward 5, expressing thanks on behalf of the soldiers in the ward. The quilt was carried and exhibited to each one and "many have been the expressions of surprise and admiration."

And that might have been the end of the story for the Belfast quilt, but for a fortuitous twist of fate. When the hospital closed in January 1865 the quilt disappeared for 147 years, before it turned up in a closet in Lewistown, Montana.

Apparently, when the hospital closed, the quilt came into the possession of Dr. D. Willard Bliss, who had been chief surgeon at the hospital. In 1875 his daughter, Eugenie, married George Milburn who, in 1882, was appointed Special Indian Agent in the Dakota and Montana territories. It was then that the quilt made the journey west.

In 2011, the Milburn family returned the quilt to Belfast. It has since been conserved and will be on exhibit periodically at the Belfast Museum.

It is thought that of the 250,000 quilts stitched for the Union army during the Civil War, fewer than 20 still exist.

One of the original poems written on the quilt sums up the sentiments of the stitchers:

The boys of our army, The flag of our country,
The soldiers of Freedom, And the Red White and Blue
On land and on sea, be they ever victorious
And each to the other forever prove true