During the Civil War, many manufacturers turned to the production of military goods such as weapons, uniforms, munitions, and other war-related items. Thus, the Civil War years were a time of prosperity for gunpowder manufacturers. 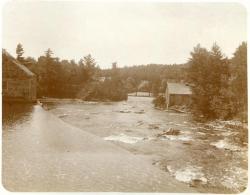 In its peak years of production during the Civil War, the Gambo Powder Mills consisted of more than 50 structures spread out along both sides of the Presumpscot River.

The gunpowder made by the Oriental Powder Company at Gambo was known for its excellent quality. Its geographic location far from the battle regions may also have been a factor in military supply strategy.

As the outlet of Sebago Lake, the Presumpscot River was a reliable, year-round source of water power. There were numerous places along the river where cascading falls were harnessed to power machinery for industry. 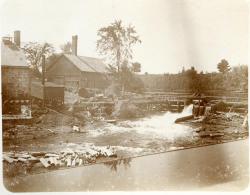 The black powder made at Gambo was a mixture of saltpeter, sulfur, and charcoal. The saltpeter used was almost exclusively potassium nitrate imported from India. The sulfur was produced in Sicily.

The imported materials were carried by sailing ships to Portland and then by canal boat or horse-drawn vehicle to Gambo. The charcoal was produced from various species of wood provided by area landowners.

The basic process for making black powder involved carefully combining precise quantities of charcoal, sulfur and saltpeter, pressing the mixture into mill cakes, then mechanically crumbling the cakes into clumps or grains sorted for various sizes. The operations were performed in a series of water-powered mills or machines, in small, lightly constructed wooden buildings.

Making gunpowder was extremely dangerous work. The slightest spark could set off explosions capable of demolishing buildings and killing or maiming the workers in or around them. The buildings were separated from one another so that an accidental explosion in one would be confined and not ignite the entire mill operation. 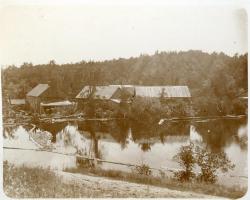 The finished product was stored and shipped in metal or wooden containers of various sizes depending on intended use. During the Civil War, military-grade gunpowder had to be shipped in heavy oak barrels that held 100 pounds each.

The finished products were shipped to Portland by canal boat along the Cumberland & Oxford Canal, or by horse-drawn wagons or sleighs, and loaded onto ships or trains.

Although trains were prevalent during the Civil War, they did not pass through Gambo until 1870, when the Portland and Ogdensburg Railroad was opened.

Return to "Gunpowder for the Civil War"