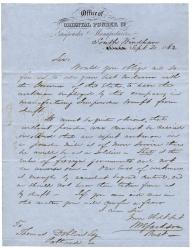 For the first year of the Civil War, a sense of duty or adventure brought enough volunteers to support the needs of the Union army and navy.

As the war continued and human losses mounted, the supply of volunteers fell short of the number needed to fight the war. To counter this trend, in August 1862, Congress gave the President authority to draft 300,000 militiamen, the states being directed to administer the process. However, it was 1863 before the draft actually began.

Introduction of the draft raised a significant concern for the owners of the Oriental Powder Company. They feared that the loss of skilled workers to the draft might jeopardize the company's ability to meet the military's demand for gunpowder. They considered their three dozen employees to be essential to the war effort.

One of the company's officers, William H. Jackson, wrote to his attorney asking him to speak with Maine Governor Israel Washburn about exempting Oriental Powder Company employees from compulsory service. 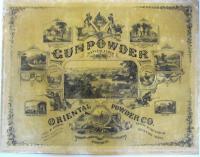 He argued that, "... an expert worker in a powder mill is of more service than he would be as a soldier ...", and, "our loss of workmen is enough by accident beyond control, and we should not have them taken from us by draft."

Governor Washburn agreed, and by his authority as the State's Chief Executive, the Oriental Powder Company workers were exempted from the draft.

Who knows what fate might have befallen powder mill workers who could have been drafted into the military, were it not for the above-mentioned draft exemption. Yet, as Jackson argues in his letter, the dangers and risks faced by workers in the powder mills were, perhaps, greater than those faced by soldiers in battle.

During the years of the Civil War, five men lost their lives from explosions in the Oriental Powder Company of Gorham-Windham.

Return to "Gunpowder for the Civil War"