In the early days of the automobile, traveling photographers on the payroll of the Eastern Illustrating and Publishing Company plied the highways and byways of the eastern seaboard, alighting in small settlements like the 31 towns featured in this exhibit, searching out iconic views of little America for the postcards the company produced.

Though they are long departed, the photographers' efforts have evolved into a document of folk history, and here viewers can tour the easternmost county in the U.S. through the lenses of these documentarians as they observed it long before the Information Age.

Washington County through the Eastern Eye features photographs from 31 towns, the majority of them taken within a period of 30 years, from 1910 into the 1930s.

The images in the exhibit are a small sample of Eastern Illustrating and Publishing Company photographs that collectively tell a big story about life in Washington County in decades long past. 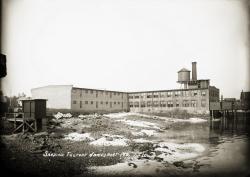 Along the bays and coves of Eastport, Lubec, Jonesport, and other communities, scores of sardine canneries provided employment to residents. Shipyards built schooners, steamboats, and all manner of smaller vessels.

The timber industry was booming, and Grand Lake Stream and the Narraguagus, Pleasant, Chandlers, Dennys, St. Croix, and other rivers were filled with logs that fed mills in communities on the banks or at the mouths of the waterways.

Sawmills and wood product manufacturers were important to the local economies of Cherryfield, Milbridge, Columbia Falls, Dennysville, and many other towns. Along the St. Croix River, Calais’ and Woodland’s paper mills consumed Maine timber.

Blueberries were a big business in Washington County, and small Washington County towns shipped large quantities of canned berries all over the United States. Vegetables from local farmers extended some canneries’ employment season.

Railroad lines were conveniently located for moving Downeast goods and products to market, and waterfronts were busy with commercial vessels.

Towns were self-contained in the early 20th century, usually dominated by a grocery or variety store, post office, school, and church in smaller communities, and a well-patronized Main Street in larger ones. Large towns had specialty stores, restaurants, and entertainment venues, and trips by train or steamboat to Machias and Calais were popular excursions.

Community halls offered motion pictures, performances, lectures, dances, and other entertainment. Fraternal organizations and granges were integral to community life. Woodland was a company town, with many immigrants who kept their traditions alive through local clubs and entertainment.

The 1920s was a period of growth for some towns, which welcomed new schools (often a high school) and public buildings. Churches were the heart of most communities. Since some of the fine early 19th-century homes were deteriorating, interest in preserving and restoring them began to rise, and they would become a source of community pride.

Grand Lake Stream and Meddybemps were among the lakeside communities that catered to sportsmen. Rustic camps, many with a variety of amenities, were numerous.

Railroads, boats, and livery services made them easy to reach. Guides, often Passamaquoddy Indians, were readily available to paddle visitors to prime fishing grounds. Hatcheries were commonplace, keeping recreational waters stocked for sport fishing. In the fall, hunting expeditions could easily be arranged.

About the Eastern Collection and Real Photo Postcards