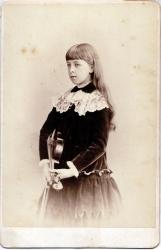 Mary Elise Fellows White, born in Skowhegan in 1873, devoted much of her life to music: playing the violin and writing about music. Writing poetry and her parents, children, and extended family also helped sustain her through professional, financial, and personal ups and downs.

The only child of James and Deborah Swan Fellows of Skowhegan, "May" Fellows showed early musical talent. Her mother encouraged the young violinist, arranged lessons for her, and ultimately, when Mary Elise was nine years old, enrolled her in the New England Conservatory in Boston.

The child had a bright future and she and her family anticipated success – musically and financially. While not all the promise and hopes were fulfilled, Elise Fellows White was recognized at various points in her career and known within some notable music circles.

Music and Musicians of Maine, published in 1928, noted, "Maine has not produced a large number of violinists, but some of them have become known throughout the concert world in New England, while the popularity of others has reached far beyond its borders."

The author, George Thornton Edwards, listed nine violinists. Of White, he wrote, "Among those who have added much to Maine's prestige in music were … Elise Fellows White of Skowhegan, who made her debut with Nordica, studied and played in public in Vienna, Boston, New York and throughout the Northwest and Canada." 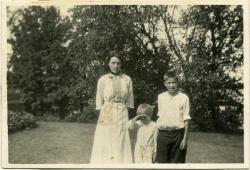 The book also mentioned that White's "A Song to Maine," with words by Louise Helen Coburn, became the state song for the Daughters of the American Revolution, of which White was a member.

In 1898, Mary Elise Fellows married Bruce M. White, a mine owner and operator from Sandon, British Columbia. While music continued to be important to her, White's life changed as she had two sons, parents in Skowhegan where she and her sons returned in 1907, financial and practical concerns following her husband's death in the flu epidemic of 1918, the loss of most of her money in the Great Depression, and life alone after her mother's death on Christmas day in 1934.

White did not want to be forgotten, despite her disappoints. She kept her diaries, copies of musical programs, newspaper and magazine clippings about herself and of articles she had written, photographs, lists of notable people she had met or seen perform – and multiple copies of an autobiography she wrote in 1938.

About the autobiography, she wrote, "Let the record be, therefore, not one of joys and sorrows, though they have been intense enough in my life, but let this narrative deal with the surroundings and scenery of the journey rather than with the mishaps and worries of the traveler. Let it be a story of privileges and of opportunities –– not always made the most of, perhaps, but for which I am ever more grateful and more generously rewarded in a wealth of good memories."

Candace Kanes, curator and historian for Maine Memory Network, edited and wrote the introduction to A Maine Prodigy: The Life & Adventures of Elise Fellows White. Dr. Houghton M. White, grandson of the violinist, compiled the book based on Elise Fellows White's autobiography, diaries, and other sources. Maine Historical Society published the book in 2011.