Steamboats at Work
The lake was a great avenue into the north woods, and those forests were, in turn, the principle economic resource of the State of Maine.

Steamboats became the means utilizing that broad and shining avenue.

Each fall an army of loggers along with their supplies were ferried up the lake to busy debarkation ports such as Lily Bay, Seboomook, and North East Carry.

The quantity and weight of what the steamboats could carry was greatly augmented by the use of barges towed alongside the boats or behind when the weather was rough.

Barges carried carloads of grain, mountains of hay, cattle, automobiles and tons of cement for the Great Northern dams. 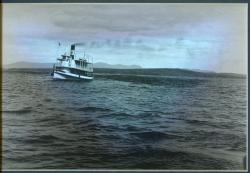 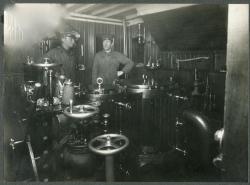 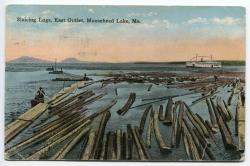 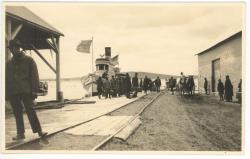 Spring and early summer was towing season. The season's cut of logs (and later pulp wood) was rafted down the lake. Millions of feet of logs were sent down the Kennebec River to waiting mills.

Towing was profitable for the steamboat owners. In one season of towing the steamers Moosehead and Katahdin earned enough money to pay for the new steamer Twilight II.

Our picture shows the steamer Louisa and passengers at the Lily Bay dock.

The storehouse on the right and the track used to unload freight gives indication on the amount of traffic involved at this depot serving a large logging enterprise. Note the eagle on the Louisa's pilothouse roof.

Steam scows and yachts:
The utilization of Moosehead Lake by so many steamboats had two major dimensions, epitomized by the steam scows, those ungainly but practical working boats, and sleek-hulled yachts.

There was along the shores of Moosehead a cohabitation of worlds. Our photo shows the steam barge Owl loaded with hardwood logs, which could not be rafted. At her stern is the square and unadorned superstructure, which housed her pilot house, engine and side wheels.

The second photo takes us to the other world - the yacht anchorage at the Mt. Kineo Hotel.

The yacht in the foreground is the Ioneta owned by a Colonel Warring. She was built in New York and brought to Greenville Junction by railroad. Sixty-five feet long and powered by a 150 horse power engine, the Ioneta was not known for speed but for elegance.

The yachting season began on Moosehead lake when Colonel Warring stepped off the train at Rockwood and boarded his waiting boat.

Passenger Service, Smaller Boats, and Racing
When Thoreau took a steamboat up Moosehead Lake in 1853, the few passengers included an Indian with his canoe and moose hides, two explorers for timber, three men bound for Sand Bar Island and a gentleman who lived on Deer Island.

Thoreau makes special mention that there were no women.

The number of passengers was soon to become a throng as tourist facilities around the lake expanded.

In summer people with means escaped the heat and threat of disease in cities while travel books advised getting away from the stress and turmoil of urban life and back to nature.

Tours became popular with individuals, schools and organizations all enjoying trips up the lake with flags flying and a band playing.

During the height of the steamboat era there was no road between Greenville and Rockwood while from the latter was a road, which extended through Seboomook to Saint Zacharie in Canada.

Creators of their graceful rakes and nice lines were a group of builders including William St. Germain, Henry Sawyer and Stillman Sawyer.

Line boats and smaller steamboats were more intimately involved in the daily lives of residents around the lake.

Some were launched as private craft; others were intended as "line boats" built to carry passengers, small freight and the United States mail.

They ran the lake from Greenville to Seboomook stopping at a growing number of resorts, camps and logging depots. From ice out until the lake froze these boat were the connection to the outside world.

They carried just about everything from tons upon tons of hay to a spool of thread.

The Louisa (40 tons and 73 feet long) is typical of the Line Class boats. She was built in Greenville by her original owner, Henry S. Sawyer in 1887, and named for Sawyer's wife.

First used to haul loggers and provisions, she was later rented for shorter trips and used on the regular runs up and down the lake. Our photo shows her plowing ice on the lake and making a stop at Gilbert & Coomb's (West Outlet) sporting camps.

Competition grew among those men who owned small fleets of steamboats.

Attention for business centered on the guides who would bring with them multiple fares. Free hauling of canoes and the providing of dinners were frequent inducements.

Two of these leading boat owners were John Eveleth and Milton Shaw. An argument between these two entrepreneurs arose over who owned the fastest boat.

The result was an event that was talked about for years: the big race between Shaw's Priscilla and Eveleth's Rebecca.

Rules for the race were adopted while behind the scenes bets were made, a professional engineer was hired by one of the owners and special coal acquired by the other that arrived in barrels marked "Sugar."

The Rebecca won, but the question of the fastest boat festered. Our picture shows the Rebecca and the Priscilla lining-up for the Big Race.

The competition ended when the Coburn Steamboat Company was formed in July of 1892.

Abner Coburn had been a governor of Maine. He and his brother Philander built an empire in logging consisting of some 200,000 acres of woodlands.

The principle businessmen of Greenville -- Shaw, Sanders and Sawyer – were managers of the Coburn Steamboat Company.

In 1900 the Coburn Company bought The Moosehead Lake Navigation Company from the Moose River Log Driving Company thus acquiring the Moosehead II and the steamer Reindeer. 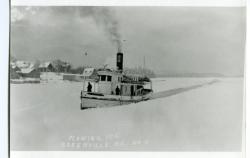 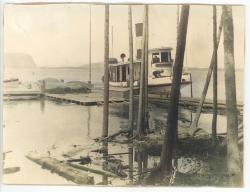 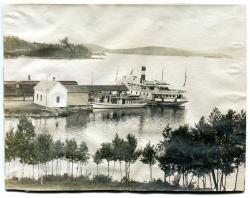 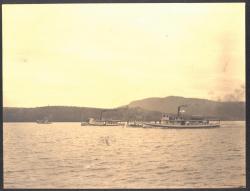 Rebecca and Priscilla lining up for big race 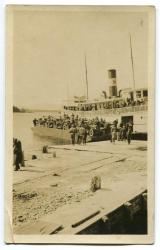 Katahdin and Priscilla at Greenville Jct.

In time all the principle steamers on the Lake were bought by Coburn Steamboat Company and sported the black and white funnels of that company.

Our picture shows the railroad pier at Greenville Junction. The building on the left is the original office of the Coburn Company.

Later this office was replaced with a larger, stucco structure that has been moved and that now serves as the Greenville Legion Hall. The steamers are the Katahdin and the smaller Priscilla.

Both the world of the lumbermen and the summer visitors were enhanced by the arrival of the railroads.

At both Greenville Junction and Rockwood, 20 miles up the lake, heavily loaded freight cars and varnished Pullman and passenger cars rolled out onto the piers.

The first railroad to reach the Lake was the Bangor and Piscataquis (later the Bangor and Aroostook), which arrived at Greenville Junction in the spring of 1884.

In 1906 the Somerset Railroad (later Kineo Branch of the Maine Central Railroad) reached Rockwood. The Somerset was billed as the "Kineo Short Line." Both routes offered first class and Pullman service and the tourist boom was on. 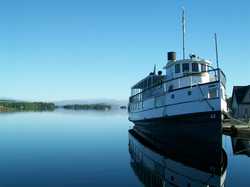 Tourist Boom:
Chief among the Moosehead Hotels was the Mount Kineo House, which in the first decades of the 1900s could accommodate 500 guests in elegant surroundings.

In the 1930s roads were extended, cars and trucks predominated and the Depression descended, the result might have been the end of the steamboat stay on Moosehead Lake, but thankfully it was not.

The stately 115 foot Katahdin II still clears East Cove's Mile Light and steams out upon Moosehead to become a white accent on the expanse of the lake.

Her whistle echoes from the cliffs of Kineo, and in that echo reverberates the rich heritage of Moosehead steamboats.

Through the generosity and dedication of many, the Katahdin's steel hull has recently been refurbished thus assuring that new generations of passengers will enjoy voyages on the King of Mountain Lakes.