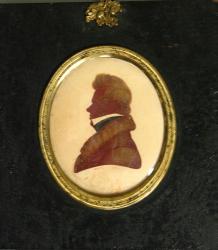 While not as colorful or controversial as the builder of the Preble House, the second owner exemplified the industrious ingenuity needed to succeed in homesteading and developing a community on a rugged Maine island in the early 19th century.

William Pitt Preble (1811-1905) descended from one of seven Preble brothers who had emigrated from England to Portland in the 17th century. Related to an influential Portland family, he was the son of the Mount Desert Rock lighthouse keeper.

He processed, witnessed, and composed documents for himself and others including correspondence, store ledgers, and shipwreck salvage papers.

He witnessed the marriages of many Cranberry Islanders over the years, and was instrumental in civic projects including establishment of the first Post Office on the island in about 1847 and construction of the non-denominational Union Meeting House in 1866.

In 1901, Preble's stepson, Samuel "Sammy" Sanford (1852-1933), won a lawsuit against him for payment due for services rendered at the Preble House.

Sanford had moved out of the main house and lived in a cabin on the property for decades. It is there he met and inspired the author Rachel Field, and thus earned the homestead a place in literary history.

Life was complex for Abigail Cobb Hadlock Spurling Preble (1808-1874). She married William Pitt Preble in 1839 after her first husband, Samuel Spurling, was lost at sea in 1837, and about four years after the same fate struck her adventurous, showman brother, Captain Samuel Hadlock Jr.

Abigail brought five Spurling children to her second marriage, and she and Preble had four more children together. They raised all nine children in the Preble House.

As a woman, Abigail is less visible in the historical record than her husband. Still, for more than six decades the Preble House was tied to females of Hadlock descent.

Abigail supervised the Preble family and farm, and documents indicate she paid the household bills.

In the 1850s, Great Cranberry Island was bustling, and families were large. The census of 1850 lists at least 202 people living in 34 houses.

As the first president of the Cranberry Isles Benevolent Sewing Circle , later known as Ladies Aid, Abigail was the driving force behind securing funds for construction of the Island's first church, the Union Meeting House. The church was dedicated in 1866; it cost $3,200.

Abigail was not immune to the hardships of her times. She lost two infant sons and saw her eldest son off to live in California during the gold rush of 1849. Abigail Preble died at age 66 in 1874; her husband lived another 21 years.

She was the third Hadlock to reside in the Preble House.

She was the Parisian-born daughter of the adventurous showman Captain Samuel Hadlock Jr. and his Prussian wife, Hanna Caroline Dorothea Russ, for whom the Preble House was originally built.

Jane Matilda Hadlock came to the house as an infant and returned as its mistress at age 49.

Jane Matilda was the mother of Samuel "Sammy" Sanford, reclusive cabin dweller and keeper of his grandfather's expedition journals.

Samuel "Sammy" Clark Sanford (1852-1933) was the son of Jane Matilda Hadlock Sanford and George E. Sanford. He was the grandson of Captain Samuel Hadlock Jr., and keeper of his grandfather's European exhibition journals.

Sanford became the stepson of William Pitt Preble in 1875 when his mother became Preble's second wife.

Sanford moved out of Preble House and lived for decades in a one-room cabin on his stepfather's land. He farmed, sold vegetables, and harvested ice for sale in the summer.

In 1898, a month after his mother's death, Sanford sued Preble for payment of services rendered at Preble House. The case dragged on for three years before Sanford won.

Preble's cross-examination states Sanford had lived at his house like one of his family, but had become moody and morose. This small suit lends additional perspective to the personalities of both men.

By chance in about 1916, Sanford encountered author Rachel Field near his cabin and told her about his grandfather's journeys.

In the summer of 1933, Field returned and interviewed Sanford several times in his cabin. Just two days before his death, Sanford entrusted Field with his grandfather Hadlock's journals.

In 1934, Field published God's Pocket, and told the world the story of Hadlock's European exhibition tour.

Her visits with Samuel "Sammy" Sanford inspired her book, God's Pocket, based on the journals of Captain Samuel Hadlock Jr., early 19th-century seafarer and traveling showman, who built the Preble House.

Field's book Hitty, Her First Hundred Years, is about a little wooden doll who wrote her own memoir of her 19th-century adventures with a Preble family, It begins in a setting very much like the Preble House.

Many documents and artifacts have been recovered from the Preble House property and grounds in the 20th century.

They are examples of the diversity of 19th-century enterprises undertaken at the Preble House.

In Preble's possession since age 25, it was recovered from the Preble House in the mid-20th century.

With a long handle attached, this tool may have been used to insert or remove wadding from a long tube, perhaps even a ship's cannon.

Among his many enterprises, William Pitt Preble built and salvaged ships on Great Cranberry Island.

The arms element from an old iron balance scale was dug up near the Preble House shed in about 1970.

The shed served as the Post Office on Preble's property when he was postmaster in 1847 and again in the 1890s.

Preble also ran a store on his property where goods would have been weighed and sold.

The brass candleholder with spikes is known as a "tommy sticker" by many miners.

It was recovered from the Preble House property. It could have been forced into a wooden beam in Preble's barn, shipyard, or fishing outbuildings shedding light during long, dark, winter afternoon work.

Tommy stickers were also used in underground mines. Abigail Hadlock Spurling Preble's son, Samuel E. Spurling, went west to California during the gold rush of 1849 and was involved in mining for years.

Cranberry Islanders have a long quilting tradition, and in the Preble's large household spanning several generations, this "crazy" quilt may well have been made on the island.