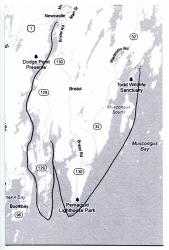 Map of the Pemaquid Peninsula

Text and images by the South Bristol Historical Society

Nearly 150 years after the founding of the town of Bristol, the people of South Bristol came to believe that their future was best secured as an independent town, not as a mere appendage of the much larger town.

To understand why this conclusion was inescapable, it is helpful to visualize South Bristol’s location on the west side of the Pemaquid Peninsula, between the Damariscotta River and John’s Bay. The eastern boundary of the Peninsula is Muscongus Bay. Virtually surrounded by water, South Bristol is sometimes described as the small arm of a lobster claw, the rest of the Pemaquid Peninsula being the larger arm.

When the Town of Bristol was incorporated in 1765, it included not only South Bristol but also parts of what are now the towns of Nobleboro, Damariscotta, and Bremen. By the time Maine became a state in 1820, fishing, both near- and off-shore, was starting to become an important economic force on the Pemaquid Peninsula. The rise of South Bristol village and adjacent Rutherford Island as a population center dates from that time.

South Bristol’s proximity to the open ocean, to the Damariscotta River and to John’s Bay dictated that fishing and boat building would become the prominent occupations of its residents.

While subsistence farming was still practiced in the Walpole area north of the village and Rutherford Island, fishermen made up a large percentage of the population in Clarks Cove, South Bristol, and Rutherford Island. South Bristol had several small fishing fleets and dried fish exporters. The town also provided many seamen for the larger fishing fleets of Boothbay and Southport and had family ties to the Gloucester fishing industry.

Ship and boat building had become an important business in the community by the 1850s. After the Civil War, there was a boom in the menhaden, or pogy, fishery. These oily fish were abundant during the 1870s, and South Bristol had three factories converting menhaden to valuable oil and fish meal. Many of the finer houses in South Bristol village date from this time of prosperity.

When the pogy fishery collapsed in the late 1870s, South Bristol suffered difficult economic times. Farming, fishing, and boat building continued, and commercial ice harvesting and exporting took place at Clarks Cove. However, with improved transportation, including steamships, small river steamboats, and trains, each summer brought more visitors to the Midcoast, marking the beginning of a new "industry" – tourism. 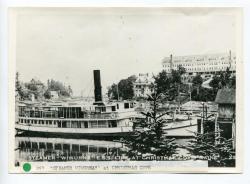 The Christmas Cove Improvement Association was founded in 1900 to provide a center for recreation for cottage owners and hotel guests alike. By the early 20th century, Christmas Cove had become a yachting destination. Providing services to summer visitors became, and has remained, a major element of the local economy.

By 1911, however, South Bristol residents were growing increasingly dissatisfied with their situation as part of the Town of Bristol. Underlying that dissatisfaction was the sense that they had little voice in local government and increasingly little in common economically with the rest of the town. Bristol was a large town, 15 miles long and 8 miles wide, making it difficult for the Bristol Selectmen to manage. 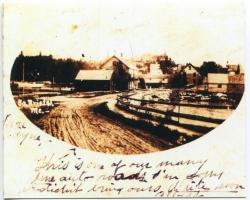 A view of South Bristol village from the mainland, ca. 1910

South Bristol residents found it almost impossible to attend town meetings held nine miles away over roads that were frequently almost impassable. Equally significant was the fact that South Bristol’s economy was based on fishing and "summer business" while large areas of the rest of the town were primarily agricultural.

Prominent among their complaints was Bristol’s failure to maintain the bridge, roads, and sidewalks in South Bristol. The mainland portion of South Bristol was separated from Rutherford Island by the “Gut” connecting John’s Bay and the Damariscotta River.

On numerous occasions in the 1800s South Bristol residents petitioned the Bristol Selectmen to replace or maintain the bridge across this passage. In 1891, the state legislature authorized the building of a new bridge. The bridge built in 1891 collapsed in 1902 and continued to require extensive repairs, but South Bristol’s requests for its replacement fell on deaf ears in Bristol.

The unequal treatment of South Bristol's schools in comparison to those in Bristol was another sore point. Again, the size of the town made it difficult to supervise its far-flung schools. Requests for funding for the schoolhouses in South Bristol were routinely cut back or ignored.

A petition sent to the legislature by South Bristol residents in 1915 stated the problem: "There is no place in the vicinity of the High School to board scholars and it is too far to transport them backward and forward ... consequently, South Bristol scholars are obliged to go out of town to attend High School (Lincoln Academy in Damariscotta). They either go backward and forward by boat (30 miles daily) or board at Damariscotta." 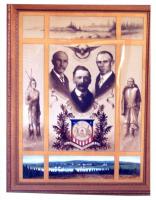 On August 30, 1918, shortly after Centennial Hall on Clark’s Cove Road was purchased to be used as the Town Hall, a major celebration of the new town took place. The first three selectmen elected to manage the town’s affairs were Wilbur Bearce, Robert Woodward and Frank Wells.

At the beginning of the twenty-first century, South Bristol retains many of the characteristics that set it apart from Bristol back in 1915. Waterfront enterprises remain central to the local economy, mainly lobster fishing, ground fishing and marinas offering services to recreational boaters as well as commercial fishermen. Boat-building is no longer a large scale enterprise, but several smaller boat builders continue the tradition of crafting fine and sturdy boats begun with the Gamage family. 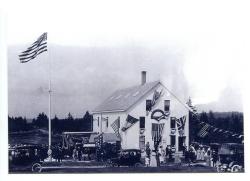 The bridge across the Gut remains a crucial link to Rutherford Island; lively discussion about a replacement for the swing bridge proposed in 2011 demonstrated that the bridge still has the ability to arouse local emotions.

While the high school so long sought finally closed in 1961, education remains a local focus as the town continues to give strong support to its K-8 school, financing a new gymnasium and creating a modern resource center in the former gym/cafeteria space.

Even though the grand old summer hotels no longer beckon summer visitors, the Christmas Cove Improvement Association continues to be the center of an active summer community. As in the past, providing services to those summer residents is a welcome addition to the local economy.

In the Good Old Summertime