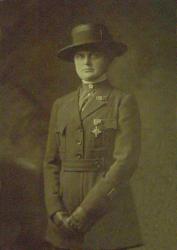 Women, War and the Home Front

Until the United States entered the three-year old European conflict in 1917, the country had followed an isolationist policy for more than a century. In addition, there was strong anti-war sentiment among many Americans, including many progressive, reform-minded women.

To fight the war, therefore, the U.S. needed not only soldiers in uniform, but the support of the general public. A government education campaign about the war set out to encourage volunteers for support roles at home and abroad and to convince the American public to sacrifice and to make donations to the war effort.

Women and the homefront were important in a number of ways. The few examples presented here demonstrate both the government's strategy in garnering the help of women and the responses of several Maine women.