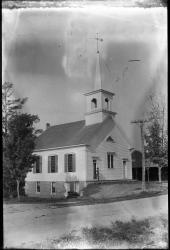 In 1826, on a lot of land purchased from Oliver Staples for $15, a plain meeting house was built under the supervision of Joseph and Samuel Richardson. The townspeople donated all the labor and materials, except the nails and the glass for windows. 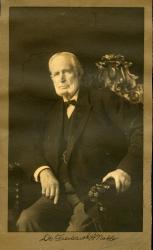 The church was built on the site of the present church, but closer to the road so that people passing by could look in the windows. On January 28, 1827 the church was dedicated at a quarterly conference under the direction of Rev. James Lewis of Gorham.

The building was designed in the old meetinghouse style. The pulpit was an octagon-shaped box about eight feet high and was reached by six or eight steps. The pews were known as "pen pews," seats on three sides of a box with a door opening into the aisle.

The walls were furnished with hooks on which to hang garments and hats. The church was lit by candles in tin reflectors. These were later replaced by a beautiful chandelier holding oil lamps. The stove sat on legs nearly three feet high and the stovepipe ran nearly the entire length of the room ending near the minister's head.

The old church was never painted, inside or outside and because no repairs were ever done, the building fell into deplorable condition. During the pastorate of Rev. Benjamin Lufkin, a decision was made to build a new church because the 1826 building was in such poor condition.

Josiah F. Sanborn, Stephen and Jonathan Burnell, and Jesse Butterfield created a company to build the present structure. They demolished the old building, laid a new foundation, gathered building materials and erected the frame. After the boarding and shingling were completed, the interior finishing work was left to Jonathan Burnell at a cost of $800. 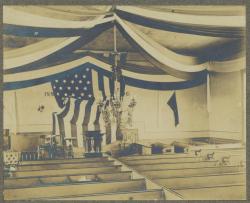 Interior of the church prior to the 1906 renovation

During the 1856 rebuild, Cyrus Freeman Burnell raised money by subscription to purchase a bell at a cost of $327.

The total cost for the 1856 building was $2,500 including the cost of the bell. The new church building, which included a vestry, was dedicated in 1856 and the building structure remained the same until 50 years later. 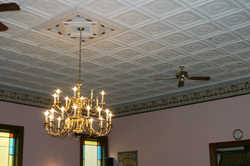 In 1906, Rev. James Potter began to lay plans to repair the church. A committee of Potter (chairman), Jesse F. Burnell, Arthur Dearborn, Weston Stevens, Nathanial Allen and George Richardson were in charge of the project. They started with borrowed money to buy shingles and got support from the public to supply the necessary funds for the extensive project.

Dr. Noble gave $100 with the stipulation that $500 more be raised. The citizens responded readily. Before long, the entire structure began to take on a new look. The steeple, belfry, and church were painted white with green blinds, new truss beams were installed to support the roof, and the old chimney was replaced. 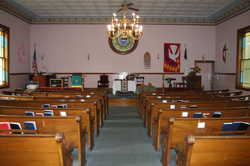 Interior of the church in 2012

Interior of the church in 2012

Work began in May and continued until the anniversary on October 23, 1906 in which three neighborhood communities participated: West Baldwin, Pigeon Brook and Burnell.

When called in for advice, a Portland consultant said the interior of the church was not modern and presented the appearance of a box.

Many more changes were made inside. The old plaster ceiling was replaced with a new steel ceiling of colonial design.

The walls were papered, the pulpit was extended across the entire church and rounded in the center, and the pulpit furniture was re-polished and upholstered.

In place of the old uncomfortable pews butting directly into the walls on the sides of the building, new seats of modern make and beautiful design were added at a cost of $215. 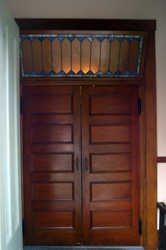 Over the pulpit was placed a rose memorial window presented by Mrs. Sarah Ingalls Richardson in memory of her sister, Mrs. Jane S. Ingalls Dow. Mrs. Richardson was the last of the descendants in Baldwin of Benjamin Ingalls, for whom Ingalls Pond is named. 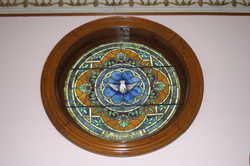 This window of circular form, richly colored with a dove in the center makes a splendid addition to the church.

In the rear, the wide unsightly recess was enclosed with well finished double action doors in the center connecting the entry way with the main part of the building.

Over these doors is a transom set in colored glass, installed free of charge by C. H. Farly and Co. of Portland, the same company that made the memorial window.

A bible, the gift of Mrs. Susan E. Weymouth, adorns the pulpit.

A new furnace was installed in the vestry. The cost of repairs totaled $1,200, which did not include labor, most of which was donated.

As repairs were being made, Chester Burnell and Greenleaf Sanborn, with assistance from Chester Rounds and William Wentworth, started a subscription to raise money for a new organ.

Today, the church building that was built in 1856 and updated in 1906 is still actively used for Sunday services. An addition was made in 2001 to enable the church to continue to expand its services into the future. 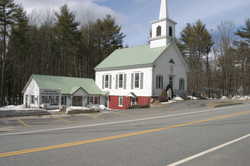 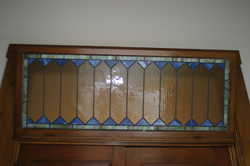 Information for this exhibit is based largely on writings by Eva Pugsley Spencer (1890-1965), whose work was unpublished, and William C. Pierce (1906-2003), who wrote about the church in Baldwin, The History of a Maine Town; As Told By Its Citizens (Compiled by Wayne Haskell, 2001).