Over one hundred years ago, A.S. Rand of Stetson decided he would breed a pair of oxen for size. His thoroughbred cross of Holstein and Durham resulted in the world’s record for a pair of oxen, both by size and weight.

Rand named these two oxen Mt. Katahdin and A. Granger after the two largest items in Maine at the time: the mountain and the agricultural Grange.

Rand, with his sons Fred Blaine and Clyde, raised these giant oxen at the turn of the 20th century on Creambrook Farm in Stetson. 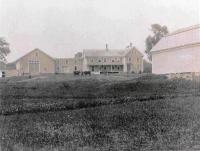 An article from the Bangor Commercial, titled "Beautiful Oxen," described two pair of oxen Rand showed at the Exeter Fair. "The younger pair, three year old Mt. Katahdin and Granger, took first premium for the best pair of oxen at the fair, also, first premium in sweepstakes pulling. They were six feet eight inches girth at that age."

The Rands decided to see how large and heavy they could grow Mt. Katahdin and Granger. The pair were large calves and at two years they tipped the scale at 6600 pounds.

The cattle did not require special diets, nor enormous quantities of food, just constant feeding. Consequently, they soon became too large for farm work.

Thus, how to exercise them became a problem.

To strengthen their leg muscles, Rand placed their water supply at the foot of an eight-foot flight of four stone steps that they descended and ascended each day.

For five years, Alphonso and Clyde Rand displayed the oxen in the northeastern states, southeastern Canada and the Stone & Austin museum in Boston. 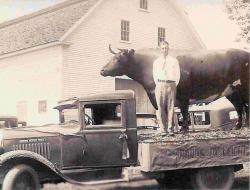 In 1906 they traveled to Madison Square Garden in New York City. On a postcard sent to his sister, Eda Rand Smith of Stetson, Rand wrote, "They had me go on parade ahead near to the Band and they announced my Oxen the Largest in the world after going Round the Ring before over 50,000 People..."

The oxen traveled by train and made quite a scene walking from train stations to places of exhibition. Alphonso Rand – handsome, silver-haired, twirling his goad like a baton – marched ahead of his prizes, Mt. Katahdin and Granger, their black coats, satin smooth and horns and hooves polished, stepped smartly along behind him as if they enjoyed the spotlight. 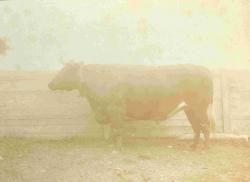 Mt. Katahdin in His Prime

"Looking at them up close was like looking at a coal-black mountain with a flat top – an animal mountain," one man remarked upon seeing the oxen.

When he was 11 years old, Mt. Katahdin died suddenly from a burst bladder.

Rand had him mounted by the S. l. Crosby firm of taxidermists in Bangor for $175. Rand continued to show the two oxen until his death in 1910. 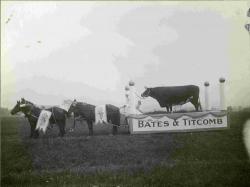 The mounted Mt. Katahdin appeared in parades and at events in the Stetson area until 1934.

That year the barn the mounted ox was stored in, owned by Rand’s grandson, Bernard Shepardson, burned, destroying the ox as well. Prior to the fire, Rand's young great-grandsons posed with the mounted ox.

Granger was put down at the age of 17 and lore says, buried under an apple tree on Cream Brook Farm in Stetson.

Prior to the Civil war, oxen were the draft animals of choice for pioneers and farmers in New England. Oxen moved slowly and steadily and were less likely to break equipment. They could work on uneven and wet ground. Oxen consumed native, coarse grasses and were economical to feed and raise, and could be eaten when their usefulness was over.

Their first task was to clear land by pulling stumps and moving rocks, working in the mud and snow common in the area. They then were used for plowing and harrowing fields, logging, building and maintaining roads and clearing those roads of snow in the Winter. They could even pull covered bridges and set them into place.

By 1890 horses replaced oxen on most New England farms. Oxen could not compete on volume or efficiency. Horses could haul logs out of the woods and return on their own to the work site. With roads in place and money available to buy horses, fewer farms maintained oxen.

The Cream Brook Farm property was originally owned by the Stetson family, for whom the town of Stetson was named.

Amasa Stetson II cleared the land and established the one mile square farm. By 1863 the farm was owned by M.E. Rice who expanded the operations to include more livestock and farm acreage.

The farm was next owned by Grenville J. Shaw who was a well-known and respected breeder of trotting horses.

Around 1889, the farm was purchased by Alphonso S. Rand, who with his sons Fred Blaine and Clyde C., raised Mt. Katahdin and Granger, "The World's Largest Oxen."