Cmdr. George Henry Preble and the Blockade at Mobile 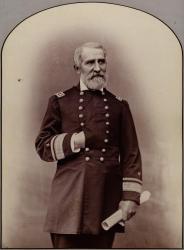 When he reported for Civil War duty in 1862, George Henry Preble (1816-1885) of Portland, nephew of Commodore Edward Preble, known as the father of the Navy, already had a lengthy Naval career behind him.

He had been in the Second Seminole War in Florida, part of the effort to establish an embassy and trade in Canton, China, involved in the siege of Vera Cruz, Mexico; commanded a ship that surveyed Japanese waters; prepared sailing directions to Shanghai, and was a lighthouse inspector.

Preble was part of Union efforts to gain control of the Mississippi River during the Civil War. During his service in Commodore David Farragut's naval force in Louisiana, Preble nearly lost not only his command, but also his reputation as a naval officer.

As commander of the steam sloop Oneida, Preble was part of the blockade of Mobile Bay, charged with keeping merchant ships and Confederate ships from penetrating the blockade.

When the Confederate ship Oreto ran the blockade, Preble was relieved of his command by Secretary of the Navy Gideon Welles.

In a letter to Welles, Preble wrote, "I have just read in a newspaper a 'General order' issued by yourself by direction of the President, dismissing me from the Navy for neglect of duty, in permitting the armed Steamer 'Oreto' to run the blockade of Mobile." That was not the case, Preble wrote, adding that he demanded "the privilege of a Court of Inquiry, anticipating a revocation of your order, as public, as this has been made and a restoration to this command."

In his recounting of the incident, Preble described how most of the steam gunboats that should have been in the area had been withdrawn, or were being repaired. What was left to enforce the blockade was a "small and reduced force," Preble wrote. One of the Oneida's boilers was shut down for repairs; Preble had ordered "a full measure of steam to be kept on the remaining boiler." Preble believed the second boiler was operating when the Oneida chased the Oreto (also known as the Florida).

That, however, was not the case. The "usual good weather speed of ten to ten and a half knots, was very much diminished."

He also wrote in his letter to Rear Adm. David G. Farragut, his commanding officer, "you expressed the opinion I should have fired but one shot across his bows, and the next at him. Had I not been almost convinced he was an English man of war, I would undoubtedly have done so, but the deception was perfect and his unparalleled audacity in standing directly and boldly for us helped the deception. I did not wish to break our neutrality or be wanting in courtesy with a friendly nation."

However, the major issue was the speed of the Oreto was much superior to that of the Union ships in the area.

He concluded, "That I did my whole duty in this matter, I fearlessly claim." And of his dismissal, he wrote to Farragut, "This is hard usage and small consideration, for one, who to-day completes his twenty-seventh year of service. I have been most cruelly and unjustly treated."

Preble defended himself, and appealed to Brig. Gen. George F. Shepley, a fellow Portland native who was serving as military governor of Louisiana. The letters here -- Preble's plea to Lincoln, his report on the incident, and his request to be reinstated -- all are part of the papers Shepley saved and are copies of the ones Preble sent to Washington.

In his letter to Lincoln, Preble wrote, "I do not believe you would do intentional injustice to anyone, yet you have done me the most cruel injustice." He went on to argue, "I can prove by every officer and man on board this ship or who was present on the occasion referred to, that I did do my utmost to overtake, capture & destroy the 'Oreto,' and that omitting no duty, I performed my whole entire duty, energetically and faithfully, as I have done while in the service."

Lincoln did reinstate Preble, who was assigned to find Confederate cruisers in the eastern Atlantic, then was part of a naval force that supported Gen. Sherman's march to the sea.

Preble's naval career continued following the war and he became a rear admiral in 1876. He also wrote a number of books, including A Chronological History of the Origin and Development of Steam Navigation, 1543-1882, Early Ship Building in Massachusetts, a genealogy of the Prebles in the U.S., a history of the Portsmouth Navy yard, an account of the opening of Japan, and a history of the U.S. flag, and of naval signals, symbols, and songs.