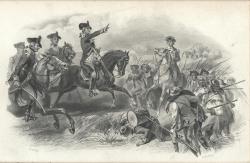 In many ways, William Bayley of Falmouth (Portland) remains a mystery. He and his father, John Bayley, signed indenture papers in 1774 for William to become a joyner's apprentice. But only a few years later, William Bayley left the apprenticeship to become a soldier in the Continental Army.

Most of what is known about his war service is revealed in letters he wrote to his mother, Jean Bayley, then a widow. Only one of her letters to him survives.