Wired! How Electricity Came to Maine 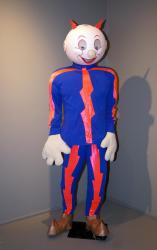 On January 5, 1880, in a tiny community in Piscataquis County, the state's first reported electric lights were lit, illuminating the Willimantic wood products mill at Greeley's Falls. An observer wrote, "The electric light shone upon a large company of guests there assembled."

Harnessing the power created by Maine's numerous rivers as they dropped from mountains toward the ocean had long drawn industry to the state. Rivers powered machinery, but like Willimantic's first lights, did little for homes and small businesses. Transmission of power from rivers and from wind usually was quite direct: the consumer of the power was located next to the source.

The complex mixture of engineering and technology, wires and poles, and transformers and meters that make up the electric grid were not enough by themselves to launch a revolution of electricity in Maine. The final pieces – consumer interest in and demand for electricity and its attendant products – were necessary before Maine became wired.

"Just plug in! I’m always Reddy!" Created by Ashton B. Collins in 1926, Reddy Kilowatt was used by utility companies worldwide -- including Central Maine Power Co. -- as a friendly symbol of electrical service. For decades the character was the face of the company, appearing on materials as varied as promotional souvenirs and notices to customers – or, sometimes, "in person."

But electricity in Maine is not just a subject for history. It remains a topic of conversation and debate today. Conservation, efficiency, sustainable energy, and leaving the grid are common themes of discussion. As we search for new "green" sources of energy, we also seek to find a balance between commercial opportunity and stewardship of our natural resources.

This exhibit is based on a physical exhibit curated by John Mayer that opened in the Maine Historical Society Museum on June 22, 2012 and continues through May 26, 2013.

Electricity in the Home