Maine Through the Eyes of George W. French 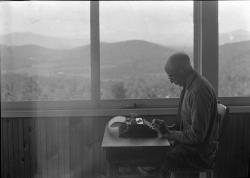 Photography is an art capable of recording history. It continuously evolves both conceptually and technologically. Photographer George W. French experienced such innovations while capturing his own version of Maine's history.

George Washington French (1882-1970) was born in Kezar Falls. His interest in photography developed as a child. As an adult, French and his family moved to Bloomfield, N.J., for a job, and where he started his own art and commercial photography business.

French worked with a variety of photographic methods during the 20th century. He produced tintypes, glass negatives, color reversal film and more. He evolved as the technology did.

Outside of work, French was an enthusiast of genre photographs, or pictures that tell stories. Rather than capturing the most exciting scenes, French preferred to take pictures of everyday life; capturing the true spirit of Maine.

George W. French published Photography for the Amateur in 1922. This 417-page book served as a study guide for beginner photographers. French wrote a plethora of information on cameras, film, lenses, development, composition and dozens of related topics. The study guide encouraged readers to use their freshly learned skills to capture their own history.

French was enthusiastic about his work. He won the first photo competition he ever entered and said that the prize, "almost resulted in heart failure, but I recovered and with such an appetite for more that there has been no let up since!"

Sarah Weirich of Freeport is a member of the 2013 class at St. Mary's College of Maryland. She majored in Art History and minored in Museum Studies.