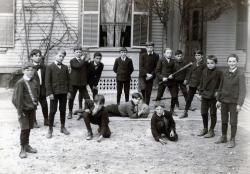 It was meant to be temporary. Once they had earned enough money, they planned to go home to their families in Quebec. But for various reasons, the French Canadians who immigrated to Maine after 1860 rarely made enough money working in the textile mills to return to Quebec or New Brunswick.

Instead they put down roots, invited their families to join them, and made new lives in the United States. The majority of these first-generation immigrants continued to think of themselves as Canadians, even after decades in their new country.

But what about their descendants – their children grandchildren, and great-grandchildren? Franco-Americans are exceptional among immigrant groups in that they retained their distinct cultural identity for a long period of time.

But throughout the 20th century, Francos, and particularly their children, were to come under new pressures that would cause them to think of themselves first as Franco-Americans and then, often, simply "Americans."

The earliest Franco immigrants arrived in Lewiston to find that the promises of steady work and boundless opportunity were greatly exaggerated. Facing hostility from the existing population, and with limited means at their disposal, Francos found it necessary to rely on each other for support.

Ghettoized into communities known as Petits Canadas, young Franco children would have grown up surrounded by other French-speakers and with limited contact with the English-speaking world – in Lewiston, Little Canada was literally cut off from the rest of the city, surrounded by the Androscoggin River and the canals. 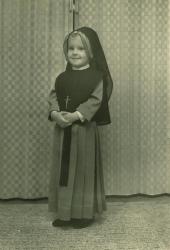 As good Catholics, most Franco-Americans had large families – 12 children per couple was not uncommon. In the era before social welfare programs, the Catholic Church also provided the "safety net" for most families.

In Lewiston-Auburn, the church provided a number of parish schools in which French Canadian priests taught Franco children in their own language. For families who could not afford to feed and clothe their many children, the Sisters of Charity of St Hyacinth ran two "orphanages" – the Healey Asylum and St Joseph’s – which functioned primarily as boarding schools for needy children. Again, these were exclusively French-speaking environments, in which children were taught their own history and culture.

The early 20th century saw increased nationalism in the United States, and increasing pressure on immigrants to assimilate. In Maine, the reborn Ku Klux Klan had its largest chapter outside the southern states in the 1920s, and their primary target was the French-speaking Catholic Franco-American population.

The Maine State Legislature made it illegal to speak French in public schools (outside foreign language lessons) in 1919, a law that persisted for half a century. Writing "I will not speak French in school" repeatedly was a common punishment for Francos in this period.

But the pressure was not just from the outside. Some Francos had French language literally beaten out of them in school, but others were encouraged by their parents to speak English. Jobs were often advertised with the caveat "no French need apply," and parents who wanted their children to have an alternative to factory work saw English as their means of social advancement. Children learned to hide their French accent, first in the playground, and later when they went for job interviews.

Modern technology also played its part. In the 1800s and early 1900s, families entertained themselves. Block parties in which neighbors assembled to share stories, songs and a little liquor ways to blow off steam after a long shift at the mill. But the advent of radio, and then television, provided new entertainment media for children, and they were more likely to learn words to Beatles' tunes than Franco folk music. 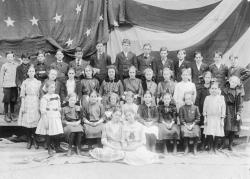 The development and legalization of oral contraception in the 1960s led to a reduction in family sizes, and a decrease in poverty for many families. The passage of child labor laws in the 1930s prevented children from joining their parents on the production line, and increased their life chances by keeping them in compulsory schooling.

The introduction of the interstate system and air travel in the 1950s also allowed these more socially mobile Franco Americans to become physically more mobile. The integrity of the Little Canada neighborhoods broke down as Francos reaching adulthood in the 1960s and 70s followed their baby-boomer contemporaries in moving away from their hometowns, and as their parents could afford housing in other parts of town.

Finally, the late 20th century saw blows to the two defining pillars of the Franco-American community – the textile mills and the Catholic Church. Manufacturing centers like Lewiston-Auburn went into steep decline from the 1970s onwards, and the Catholic Church suffered falling visitor numbers as a result of a series of scandals.

So what does it mean to be Franco-American today? Thankfully, the 1970s also saw the rise of institutions devoted to preserving Franco history and heritage. In places like USM's Franco-American Collection, and the Franco-American Heritage Center, today's young Francos are re-discovering the culture of their grandparents. The days of neighborhoods filled with French voices may be over, but Franco culture survives, and is being embraced by a new generation. They may not dream of "going home" to Canada, but a part of them will always have a place there.