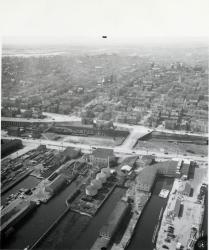 Images from National Archives at Boston

A now rusty steel building on the shore of Little Chebeague Island played a small but important role in the U.S. Navy’s successful effort to win WWII.

An article in the August 30, 1945 edition of Fleet Recreation News, published by U.S. Naval Station Portland, included a photo of firefighting aboard the aircraft carrier Intrepid (CV-11) following a kamikaze attack in April 1945 near Japan. The article also included photos of firefighter training on Little Chebeague Island in Casco Bay.

The Navy article stated: "The photos show … the type of training and instruction given, that prepares the men of the Navy for such good work as was done on the USS Intrepid."

Before World War II, Little Chebeague was populated primarily by summer cottages. It had been inhabited by Euro-Americans for several hundred years, a site for farming, fishing, and, ultimately, a resort hotel and the tourist trade. Steamboats took visitors to the island in the summer in the 19th century, where they could enjoy recreational activities and the amenities provided by the hotel, which was built in 1867 and burned in 1893.

The island's fortunes changed with World War II, which started in Europe in September 1939. Soon, the Army and Navy began preparations for war. Army Coast Defense units were called to active duty and the Navy made plans for patrolling the New England coast.

In December 1940, the British government signed a contract for construction of a new shipyard in South Portland to build 30 freighters. By the end of the war in 1945, the South Portland shipyards had built 266 freighters, mostly Liberty ships, and employed 30,000 men and women at its peak.

On June 21, 1941 the first element of what was to become US Naval Station Portland opened an office in the old post office building at 79 Exchange Street.

The admiral was responsible for managing all destroyers and escort ships in the Atlantic Fleet. He and his staff oversaw training, equipping, maintaining and dispatch of destroyers and other convoy escort ships to operating commands. New ships did their shakedown cruise under his supervision.

Ships returning from escorting convoys across the Atlantic went to the Boston Naval Shipyard for voyage repairs, and then did a short period of refresher training in Casco Bay before heading out on their next assignment.

Thus, starting in 1941 and building up rapidly thereafter, Casco Bay was a training site and gathering point for the Navy and Little Chebeague Island was an important part of that story.

Erno Bonebakker is a volunteer with the Maine Island Trail Association working to enhance Little Chebeague Island as a recreational and educational resource.