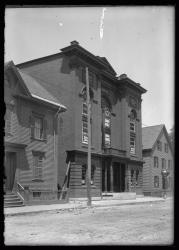 In 1904 when Congregation Shaarey Tphiloh built a synagogue on Newbury Street, most of its members were from Eastern Europe, some newly arrived, some the children of immigrants. Two groups of Orthodox Jews had come together to create the synagogue, whose name means "Gates of Prayer."

Portland's Jewish population was relatively small -- but had three Orthodox congregations. The earliest Jewish immigrants to Portland had gathered together in small groups and worshiped in people's homes or rented spaces. By 1890, three Orthodox groups were dominant: Sharith Israel, formed in 1883, built a synagogue in 1890 on Middle Street; Beth Judah began later in 1883; and Beth Hamidrash Hagodol, began in 1890.

In 1900, about 60 Jewish families belonged to the three congregations and, according to author Benjamin Band, members were concerned about the waste of resources, leading Beth Hamidrash Hagodol and Shaarith Israel to join in forming the Hebrew Building Association in 1902.

The Jews who immigrated to Portland from the 1860s into the early years of the 20th century came mostly from Eastern Europe and brought with them particular religious and social traditions, including the use of Yiddish, especially for religious services and documents.

The Jewish community, most of whom lived in the lower Munjoy Hill area, had organized a Portland Lodge of B'nai B'rith in 1874 and a Hebrew elementary school in 1884. B'nai B'rith, a social service and mutual insurance organization, bought land in Cape Elizabeth in 1875 to establish a Jewish cemetery.

Since the early 20th century, the nature of Portland's Jewish population has changed, Conservative and Reform synagogues have come on the scene, and Congregation Shaarey Tphiloh has moved away from Newbury Street. Yet, it continues the mission it began in 1904.

From Yiddish to English: A Synagogue Grows