Images from the University of Maine at Farmington Archive, Mantor Library

The Household Arts program, as Home Economics was originally known, began at Farmington State Normal School in 1911. It encompassed Manual Training courses previously in the F.S.N.S. curriculum and added sewing and cooking. The purpose of the program was to train teachers of the domestic arts for the public schools of Maine.

Marion C. Ricker, the first director, proved more than capable of building the program to meet the growing demands in Maine schools for Domestic Arts educators.

The program consisted of two parts: a two year course covering the fundamentals of cooking and sewing and a third year course of advanced work for students preparing to work as supervisors and special teachers of household arts.

The Cottage and The Annex

The original location for the Household Arts Department was the Norton house, which was renovated and christened "The Annex" by the students. The program soon outgrew the Annex and the school purchased the Leavitt house, which became known as "The Cottage," to serve as the department's base beginning in January 1916.

The property's barn was converted into cooking and sewing labs and christened the new "Annex." The house eventually became home to the program's "Cottage babies" as the curriculum changed to include hands-on practice in the care of young children.

The Cottage remained the Department's home until Ricker Hall opened in fall 1963 as a new facility for the teaching of Home Economics. 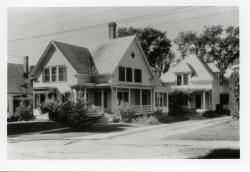 In 1927, the State of Maine granted the Normal School authority to grant a Bachelor’s Degree to graduates of the four year courses, including Home Ec.

There was also a new emphasis on practical experience that resulted in senior students spending time in the "practice house" learning home management and caring for an infant and the development of a nursery school that provided students the opportunity to observe and work with young children.

Over time, students' practical experiences in Home Ec program came to include the nursery school, experience in the Cottage (later known as the Home Management House), and student teaching away from campus.

In 1918, the University of Minnesota piloted the use of a "practice baby" in its Home Economic program as a way to provide the students with experience managing a household and caring for an infant. The University took in two babies from a children's home to be cared for by students in one of school's two home management houses under guidance of the house supervisors.

Care of the babies followed a strict regimen that included a daily schedule, controlled diet, supervised play, and discipline to modify behavior as needed. The project was deemed successful and the practice soon became a standard in Home Ec education at other schools around the country.

Leo, the first "practice baby" at F.S.N.S, arrived in 1927. Many more babies followed, living in the Cottage and cared for by the Normal School students as an integral part of their Home Economics education.

By the late 1950s, the practice of a baby in permanent residence at the Cottage was slowly replaced by an infant delivered to the Cottage in the morning to be cared for throughout the school day by students then collected by the parent and taken home for the night and weekends. The last baby in the "Cottage baby" program was in 1971.

Putting Skills to Practical Use

Even in the infancy of the program, the Home Ec students were proactive in putting their domestic skills to use while still earning their degrees. The students started a Home Ec Club in 1916, which quickly became an outlet for providing aid in the local community as well as the wider world.

Over the years, students raised funds for furnishings and equipment for Cottage, Home Ec labs, and nursery school and for a Home Ec library housed in the Cottage. For many years, they provided annual Thanksgiving baskets for area families in need and a Christmas party for local children.

They also knitted items for the Cottage Babies and did their part for war relief in the 1910s and again in the 1940s by knitting, sewing and rejuvenating clothing to send to war refugees and contributing to food conservation efforts during the World War II years. 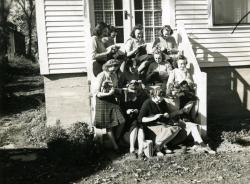 End of an Era

The Home Economics program continued for many years. In 1995, the program was eliminated at the University of Maine at Farmington.

Home Economics through the years at F.S.N.S.

More information on the Practice Baby program at F.S.N.S.