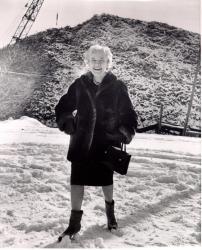 Another Mainer, Ben Bubar, was the Temperance Party presidential candidate in 1976 and 1980. Part-time Mainers Nelson Rockefeller and George Herbert Walker Bush also have been candidates for president and vice president.

No full-time Maine resident has been elected president, but James G. Blaine was the Republican nominee for president in 1884, losing the election to Grover Cleveland. Hannibal Hamlin served as vice president to Abraham Lincoln from 1861 to 1864. Arthur Sewall of Bath was unsuccessful as vice presidential candidate with William Jennings Bryan in 1896.

Besides Mainers themselves, many other candidates over the years have stopped in Maine -- often briefly -- to garner votes. In addition, many sitting presidents, future presidents and former presidents have visited the state, and made public appearances.

These images capture some of the excitement of past presidential campaigns and presidential visits to the state -- enthusiasm that transcends political affiliation and eras.