Maine Memory Network
> Lt. Charles Bridges: Getting Ahead in the Army 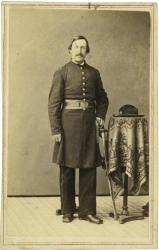 Sgt. Charles Bridges of Co. B of the 2nd Maine Infantry was close to the end of his two years' enlistment in early 1863 when he, along with several friends, took advantage of a chance that would mean higher pay and, perhaps, less combat.

Born on July 31, 1838 in Castine, he had worked as a blacksmith, as did his father, before the war. When the Civil War began in April 1861, Bridges was 22. He served in the 2nd Maine Infantry through two years of combat in the east, from Bull Run to Fredericksburg, where he was wounded. He held the rank of 1st (Orderly) sergeant in Co. B.

In early 1863, the general recruitment of Black troops that began in the wake of the Emancipation Proclamation provided an opportunity for advancement to many white soldiers and Bridges decided to jump at the possibility of a commission.

He left the 2nd Maine together with brothers William S. and Lewis P. Mudgett. William, 23 at the war's start, was a Stockton schoolteacher who had enlisted as a private but had quickly risen to the rank of captain, commanding Co. B. Lewis, 25 at enlistment, was a shipwright in Prospect. He too had begun as a private, but was promoted to 1st lieutenant in less than a year. 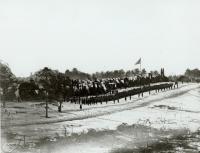 Charles Bridges received an officer's commission as a 1st lieutenant, and was given the command of Co. H. William S. Mudgett was promoted to lieutenant colonel. Lewis was promoted to captain and served as acting assistant adjutant general.

The items that Bridges left behind from his Civil War experience are mostly official documents relating to his position as regimental quartermaster. Though they give little clue to Bridges' personal experience of the war, his papers highlight the functioning of a regiment, hint at the role of white officers in units of Black men, and suggest the role of friendships and regional loyalties for Civil War soldiers.