Text by Doreen Rogan
Images from the Seashore Trolley Museum

But it was the unexpected that kept tourists and day-trippers coming back for more. Visitors might see elephants walking down the road from a visiting circus or see a pony doing tricks and providing rides to children on the beach. If folks were really ready to let go and have some fun, they could join in and do the Tango on the sand with the waves lapping at their toes! Or jump aboard the Comet. For a dime, intrepid beach-goers could ride the Comet as it carried its passengers from a platform on the beach down a rail into the ocean. The passengers remained dry on this exciting ride.

The Portsmouth, Kittery and York Street Railway laid its tracks along York Beach in the summer of 1897, ending the line at York Beach Corner. The road was so successful that three years later, the railway invested in St. Aspinquid Park a half a mile north of York Beach Corner and developed it as a modest trolley resort.

Numerous types of entertainments were available at York Beach to fulfill the varying desires for fun and release. Simple beach distractions included fishing, boating, bathing in the ocean, convalescing in the sea air, and strolling along the boardwalk. The roller rink, the movie theater, the bowling alley, and the dance halls provided a more thrilling sense of freedom and excitement.

Just a half mile north of York Beach Corner, St. Aspinquid Park opened in 1898 to provide visitors something different from the rest of the beach amusements. The Park offered visitors a way to connect with the mythical Indians of pre-colonial days and to pay homage to York’s legend of Saint Aspinquid.

According to the legend, Saint Aspinquid was an Indian chief, also known as Passaconaway, who converted to Christianity and traveled the country on a mission to convert Indians across tribes to Christianity. The legend says that he returned to York in 1682 to die and was buried in an elaborate ceremony atop what is now Saint Aspinquid Mountain. 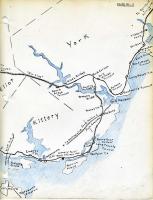 A colossal statue of Saint Aspinquid holding a bible in one hand and a tomahawk in the other loomed inside the entrance of the 14-acre wooded park.

For the admission fee of ten cents, visitors could enjoy picnic areas and walking paths, a tea house and cafeteria, and a small collection of wild animals. The park's casino housed the 3,000 square foot dance floor and large stage for theatrical entertainments. Admission to the casino required an additional 15 cents.

The word "casino" did not refer to gambling, but rather to an establishment where visitors could dine, dance, or play cards.

The trolley line was extended from York Beach Corner to the Park in 1900 and continued to deliver visitors there for the next three summers. The park was closed in 1903.

On a hot summer days at the turn of the last century, day-trippers from Sanford could enjoy the cool breezes at the Cape Porpoise Casino and a sumptuous shore dinner for only 50 cents!

The Sanford & Cape Porpoise Railway opened the Cape Porpoise Casino on July 20, 1900 with a tea dance. At this occasion, beautifully attired men and women promenaded in the dance hall that was decorated with evergreen boughs, goldenrod, and mountain ash. 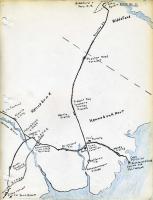 When the Casino first opened, it featured a broad veranda facing the ocean and an adjoining small porch for relaxing and enjoying the cool sea air and ocean views. Inside was the large dance hall and both a public and a private dining room.

During the busy summer months, trolleys left Sanford hourly in the mornings and evenings and every half hour in the afternoons. Over the next eight years, the Casino was expanded to include a large auditorium with a polished hardwood floor for dancing, a performance stage, a large stone fireplace and an additional dining room.

In 1909, a roundtrip ticket from Sanford to the Casino cost fifty cents. This day-tripper fare revenue was a great way for the railway to offset the costs of transporting coal that was offloaded from Schooners at Cape Porpoise for use in the Sanford mills.

The Casino remained a popular destination and delighted diners with its celebrated and inexpensive seafood menu until the building was lost in a fire on the night of September 6, 1915, Labor Day.

In the Heart of Maine