Maine Memory Network
> Trolley Parks in the Heart of Maine

Trolley Parks in the Heart of Maine

In the 1890s, Lake Grove on the eastern shore of Lake Auburn delighted the locals with Victorian pastimes. Trolley-trippers could have their picture taken in the tintype photography tent. They could roller skate at the Rollway, or they could visit the dime museum and see the stuffed catamount and other curiosities.

The Lewiston and Auburn Horse Railway opened Lake Grove -- Maine's first park developed by a railway -- in 1883. Park-goers paid a nickel to board horse-drawn cars in Lewiston and Auburn for a 45-minute ride out to "The Grove." The park, in its early years, was fairly unsophisticated, offering only picnic grounds and a small menagerie for entertainment. However, it was a financial success and soon began to add new attractions.

A restaurant served up the requisite shore-dinner. An open-air theater hosted melodramas, vaudeville acts, and musical groups like the Powder Puff Review with the "Baby Vamp Chorus."

During the summer season, the horseshoe courts, the bowling alley and the croquet lawn were very popular. Row boats and canoes could be rented at the boat dock. Visitors with a little extra money could go for a 15-mile steamer cruise around Lake Auburn. In the wintertime, the railroad company promoted ice skating parties at Lake Grove. Lights were strung up in the trees along the shore and the ice was scraped. Hot cocoa and other refreshments were available.

The Rollway, advertised as "Maine's Finest Roller Skating Rink," was added in 1906 and proved so popular that the railroad company began running its new electric cars every half hour to handle the crowds. Mornings at the Rollway catered to ladies just learning to skate. The Lewiston Brigade Band provided musical accompaniment.

Lake Grove was successful for 35 years – a good run for any trolley resort. The advent of the automobile led to declining trolley fares and the railroad company closed Lake Grove in 1928.

Mill workers from Lewiston with a day off would often head out to the Tacoma Inn for lunch and then continue their day's adventure by taking one of Maine’s “Triangular Trolley Trips." 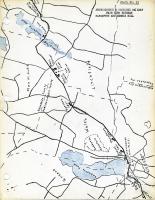 Litchfield's Tacoma Inn was developed in 1909 by the Lewiston, Augusta & Waterville Street Railway as an attraction along its Waterville-Lewiston route. The inn stood at the junction between Sand and Woodbury Ponds and offered a variety of recreational activities including boating, fishing, and bathing.

Band concerts and other entertainments, including the famous diving horses, were regularly presented. The Inn's restaurant served the ever-popular shore dinner for lunch or dinner, any time after noon.

After lunch and a stroll around the grounds to stretch their legs, visitors from Lewiston or Lisbon could continue their day's adventure by taking the Triangular Trolley Tour. The trolley would take passengers on to Gardiner, where for the price of one dollar, they could board the "Boston boat," a passenger steamer.

A cool two-hour sail down the Kennebec took adventurers to Bath where they would board a trolley home. This excursion took about 12 hours, from start to finish. Trolley-trippers could also plot a similar triangle beginning their journey in Portland.

The Tacoma Inn building stands to this day, renovated as a condomium.

The journey from Augusta to Lake Cobbosseecontee has been called "the prettiest ride out of Augusta." It was on this lake, not far from the popular trolley resort Island Park, that the song "On Moonlight Bay" was written.

To stimulate summer ridership, the Augusta, Winthrop, & Gardiner Railway Company opened Island Park in Manchester in 1903. Located on a small island in Lake Cobbosseecontee, the park featured a large hotel and restaurant (independently owned), an open-air dancing pavilion, and a theater.

Island Park and its varied amusements soon became so popular that by the summer of 1904, the railroad was running cars from Augusta to the park every 30 minutes. At the height of its popularity, the park hosted more than 1,200 visitors a day.

A 1904 travel brochure, "Along the Lake Shore," offers a tempting description of the grounds:

"The grounds are tastefully laid out with flower beds and walkways lined on either side with flowering shrubs. Picnic parties find this an ideal retreat on a hot summer day, with its beautiful shade trees, the gentle breeze from the lake and fine facilities for boating and fishing."

Island Park was one of the very few trolley resorts to outlast the trolley era. Park visitors were still dancing in the pavilion to music of big bands until World War II. 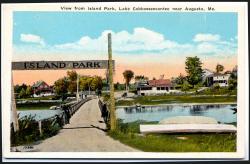 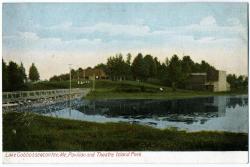 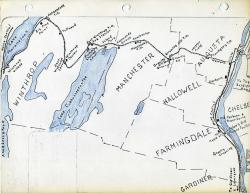 Once a tumbledown "barn theater" at Lakewood Park in Madison, the Lakewood Theater thrives to this day as the State of Maine Theater and is one of the oldest continually operating summer theaters in America.

The Somerset Traction Company developed Lakewood Park on the shores of Lake Wesserunsett in 1895. Trolleys to Lakewood ran from both Skowhegan and Madison. The fare was 15 cents. A 25-cent round-trip ticket included admission to the park.

Lakewood, a modest park, hosted a small restaurant, dance hall, a bandstand, a children's playground, and a bowling alley.

The traction company also built a large wharf and purchased a steamer to take park visitors on cruises around the lake.

In 1898, the theater was added to the park. Vaudeville shows eventually gave way to more legitimate theater under the direction of Herbert L. Swett. The theater was home to a resident stock company into the 1940s.

Lakewood Theater was a major summer try-out location for aspiring Broadway shows and soon became known as "Broadway in Maine."

The trolley company and its park ceased operations in 1928, but the curtains still go up every summer at the theater in Madison. 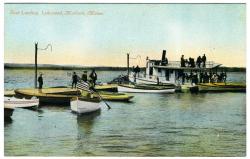 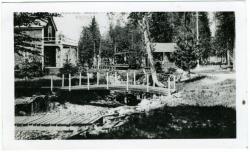 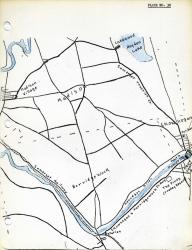 All Aboard for Trolley Parks!