For 20 cents, Portland day-trippers at the turn of the last century could hop on a Portland Railroad Company trolley car and spend the day at Riverton, Maine's premiere trolley resort. They could dine and dance, play croquet, or even see a hot-air balloon ascension and parachute adventure by Monsieur Roberto, Meteor of the Sky!

Regular cars left from Preble Street every 15 minutes starting at 8:30 a.m. to carry passengers to Riverton. One or more "wild" cars were required as extras to handle the rush to the park's theater.

The center attraction of the park was the Riverton Casino. The casino, with its broad piazzas, provided a lovely view of the Presumpscot River. A travel brochure describes "its surface dotted with canoes and other pleasure boats, all containing merry sailing parties."

The travel brochure continues with a description of the attractively furnished dining hall: it was staffed by "an efficient corps of attendants serving tempting viands in answer to the promptings and desires of the inner man. The fizz of the soda fountain is also heard, while for the sweet tooth there is an excellent assortment of the finest creations in the confectionery line." The dance hall – "the scene of merry private parties" - was also very popular with its finely polished floor and live orchestra.

Park grounds also boasted a bandstand, a deer run and small zoo, a boat house and steam launch, a steam riding gallery or carousel, a croquet field, lawn swings, a trout pond, and ample grounds and shelters for picnickers.

The outdoor "rustic theater," another attraction at the park, could seat 2,500 people. Theatrical attractions included high-wire and trapeze acts, Alabama troubadours, comedy acts, and buck and wing dancing. La Petite Blanche, the Dainty Soubrette graced the stage, as did the Zanfarellas, "grotesque, comic, and daring dancers."

And not to be outdone by other trolley parks, Riverton had its own "Slide for Life," a thrilling acrobatic descent from a high tower. 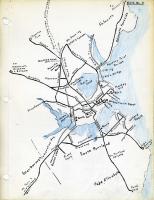 The well-known Boston firm of Frank M. Blaisdell, who designed the Boston Public Gardens, laid out the gardens and grounds at Riverton. No expense was spared in Riverton Park’s creation. Broad lawns were ornamented with flower gardens and rare shrubberies.

An advertisement describes the grounds: "Here and there throughout the park are rustic bridges, arches, arbors, seats, and in short the whole enclosure is thoroughly calculated to offer entrancing inducements to the visitor."

Riverton Park operated successfully for two decades until the beginning of World War I. Post-war economic conditions and the rise of the automobile spelled the end for the park as a trolley resort. In 1921, the Portland Railroad Company sold Riverton Park, including all buildings and land to a local realty group that proposed turning the park into a modern resort for autos.

This popular seaside get-away operated for only two years before it burned to the ground under suspicious circumstances.

The Willard Beach Casino at Simonton's Cove in South Portland was opened by the Portland and Cape Elizabeth Railway on June 10, 1896, just two weeks before the opening of rival Riverton Park. The new park hosted a reported 10,000 visitors on opening day. The company was so optimistic about their park's success that they petitioned the City Council to double-track the entire line from Cottage Road to Willard Beach.

A local daily paper from 1896 describes the new casino as an "immense structure": a three-story wooden building, 110 feet long by 65 deep. A central facade with a porch and covered entrance greeted visitors as they disembarked from the trolley cars. Two wings on either side of the entrance were enhanced by turret-shaped bay windows reaching to the roof.

The lower floor of the casino was devoted to 75 dressing rooms with heated salt-water baths. The open second floor could be used as a theater hall, with a stage at one end, or as a dance hall. In the center of the dance floor was a fountain, ten feet in diameter.

On the top floor, the casino's roof garden offered fine views of Portland, Portland Harbor, and the Casco Bay islands. Guests could relax in the shade of a striped awning on sunny summer days and listen to the band playing in the rooftop cupola.

In January 1898, the casino was destroyed by fire. The South Portland Fire Department records that the fire was of incendiary origin, but no arrests were ever made. The Portland and Cape Elizabeth Railway was already planning a new and improved trolley resort just down the line at Cape Cottage. The $35,000 insurance settlement from the Willard Beach Casino fire was a welcome windfall that the company reinvested into the new Cape Cottage Park.

The Heart of Maine