Trolley Parks Along the Coast

Was its architecture Norman? Spanish? Or merely "baronial?" Whatever it was, Maine had its very own castle in South Freeport.

The Portland & Brunswick Street Railway opened Casco Castle Park in 1902. The park's casino was unlike any other in the state of Maine. It was built to look like a real castle, with stone-colored shingles, crenellations, parapets, and a 100-foot tall tower. It even had a moat.

Passengers disembarked from trolley cars at an enclosed waiting room, and then made their way across a 300-foot long suspension bridge that spanned the deep ravine of Spar Creek.

The imposing, castellated hotel could house 100 guests who paid $3 for a night's stay, including meals.

Broad piazzas extended entirely around the building on the first and second floors, inviting guests to relax and enjoy the view.

Up amongst the parapets on the hotel roof was a roof-top garden. The tower, build of local stone, had an electric elevator and observation stations that commanded a broad vista of land and sea. 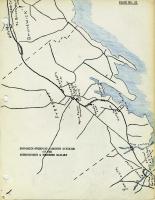 The park provided a wide variety of amusements for its guests. Dancers waltzed around the spacious ballroom, catching their breath in beautifully appointed parlors. For the musically-inclined, there were regular musical performances and community sings. For the more out-of-doors types, the park offered opportunities for moonlight sails, picnicking, tours of the formal gardens, swimming, baseball, and tennis. A small zoo delighted the children.

Casco Castle Park was also served by the Harpswell Steamboat Company. A popular summertime jaunt was to ride on the steamer from Portland to South Freeport in the morning, spend some time at the Castle, and then return to Portland by trolley in the late afternoon or early evening.

Despite its grandeur, Casco Castle Park was never a profitable operation for the railway company. In 1910, with the entire railway company in financial difficulties, the property was sold. In 1914, the hotel and casino were destroyed by fire. The tower, however, is still standing and can be viewed from Freeport's Winslow Park on Staples Point Road.

Riverton Park may have had Monsieur Roberto, Meteor of the Sky, but Brunswick's Merrymeeting Park had its own thrilling attraction: two beautiful white horses that dove from a 50-foot-high ramp, headfirst into a pool of water!

The Lewiston, Brunswick, & Bath Street Railroad developed Merrymeeting Park in 1898. The park, which opened to the public in 1899, filled 120 acres of land on a point projecting into the Androscoggin River at the head of Merrymeeting Bay. The park was seven times larger than Riverton Park and rivaled it in the quality and quantity of its entertainments and attractions.

A stately three-and-a-half storied building with brown shingle siding, white trim, and a tower served as the park's casino. Wide verandas encircled the first and second stories where guests could lounge in Adirondack chairs. An arched stone entrance way, complete with a turret, greeted guests as they arrived by trolley.

The casino's dining room could seat 100 guests and had a wide-ranging menu, serving American, French, German, and Italian cuisine. The most popular meal, however, was the 50-cent shore dinner. The restaurant had a standing order for ten barrels of lobster every Sunday to satisfy the appetites of hungry day-trippers.

At the park's zoological garden, visitors could see a herd of deer, monkeys, crocodiles, brightly colored birds, and several buffalo. The zoo was also home to a stuffed horse, purported to be the largest in the world.

On fine evenings, guests could go dancing by the pond. A rustic bridge crossed the pond and at its center was a wide dance platform illuminated by an arc light. On bright moonlit nights, the arc light could be turned off to create a more romantic atmosphere.

Other park visitors might wander along wooded pathways strung with colored lights to the outdoor theater. The amphitheater, seating 1,000 patrons, was built into the face of a sloping hillside, with an open stage at its foot. Entertainments included minstrels, vaudeville acts, magic shows, trapeze artists, tap dancing, and comedy routines – and of course, the diving horse act. Stock companies regularly performed comedic and dramatic theatrical productions.

Low attendance rates, perhaps due to the comparatively pricey 30-cent fare, proved to be Merrymeeting Park's downfall. The park never made enough of a profit for the railroad and closed in 1906 after only seven years of operation. 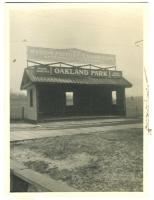 At the turn of the last century, people in Rockport were only a twenty-minute trolley ride away from a whole day full of amusements awaiting them at Oakland Park.

The Rockland, Thomaston, & Camden Street Railway developed Oakland Park in 1901. According to a travel brochure published by the railway:

"The 72 acres of the park itself are very attractively laid out, much of the architecture favoring the Japanese in style. Big stone pillars guard the entrance and set in them are many interesting relics such as a cannon ball of the War of 1812, stones of volcanic origin, etc."

A 1915 plan of the park shows a casino and restaurant, a dance hall, a women's cottage, and a baseball diamond complete with grandstand. A bandstand served as the stage for Sunday concerts as well as patriotic orations on holidays. The Fourth of July was celebrated with a grand fireworks display.

Gravel walkways, decorated with colored lights at night, wound through the woods and along the seawall with its beautiful ocean views.

Children went for rides on the merry-go-round and the aerial glide. Or they paddled about in rowboats on the small pond. Meanwhile, parents relaxed in rocking chairs on the restaurant's wide porches, sipping lemonade. Park guests could also fish from the seawall, bathe off the rocks, or play croquet on the lawns.

Free afternoon and evening "motion picture exhibitions" were screened in the dance hall. Straight-back wooden settees served as seating that "could be either stacked out of the way or else distributed around the rim of the dance floor."

A large mirrored revolving ball was suspended from the ceiling in the dance hall, enchanting dancers with its colorful, shimmering rays. Dancing was so popular with Oakland Park visitors that when it burned down in 1921, the dance hall was quickly rebuilt.

Oakland Park was a popular destination until 1931 when it was closed.

In the Heart of Maine